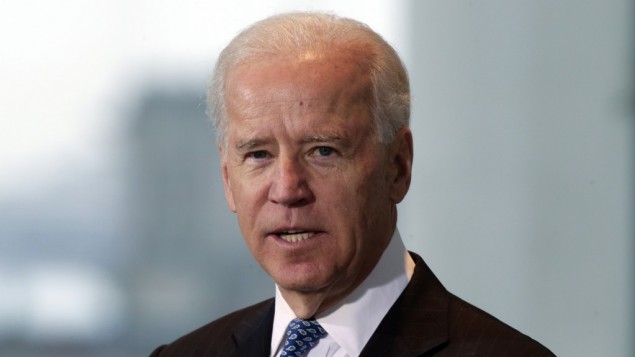 Democratic presidential nominee Joe Biden thrust his campaign into the roiling national debate over police violence and racial justice on Thursday as he traveled to Kenosha, Wis., and pointedly embraced the nation’s racial reckoning, vowing improvements if elected president.

During an emotional meeting held in a church not far from looted downtown buildings, Biden made some of his most direct comments yet on the subject of race, growing introspective at times and speaking barely above a whisper. He said the shock over the killing of George Floyd in Minneapolis in May, and the shooting that paralyzed Jacob Blake in Kenosha on Aug. 23, has provided the first window in generations for the nation to address centuries-old problems.

“We’re finally now getting to the point where we’re going to address the original sin in this country … slavery, and all the vestiges of it,” Biden said. “I can’t guarantee you everything gets solved in four years. But I can guarantee you one thing, it will be a whole heck of a lot better, we’ll move a lot further down the road.”

In tone and dialogue, Biden’s trip differed dramatically from that of President Trump two days earlier. The former vice president met with Blake’s family and spoke with Blake by phone for 15 minutes before meeting with a disparate group of community leaders. Trump had toured buildings burned after protests over the shooting, and his audience was heavy with law enforcement.

Reflecting some of the internal debate among Democrats over the balance between animating Black voters protesting in the streets — and trying to win back White working-class voters in the industrial Midwest — Biden once again opposed looting and violence but also sided with the sentiments of the street.

“I promise you win or lose I’m going to go down fighting, I’m going to go down fighting for racial equality, equity across the board,” Biden said. “The country’s ready — and if they’re not, it doesn’t matter because there are certain things I ain’t going to change. There are certain things worth losing over. And this is something worth losing over if you have to. But we’re not going to lose.”

Biden met for more than an hour with Blake’s parents, siblings, and legal team and spoke on the phone with Blake, who was shot seven times and had just been released from the ICU.

“He talked about how nothing was going to defeat him,” Biden said later. “How whether he walked again or not, he was not going to give up.”

Biden’s trip to Wisconsin came as Trump traveled for a rally in Pennsylvania, another battleground state. The president also moved Thursday to clarify comments he made on Wednesday in which he urged voters in North Carolina to attempt to vote twice, which would be a felony. Trump said in a series of tweets on Thursday that he was urging those who vote by mail to follow up at their polling place to make sure their mail-in ballots have been counted.

The comments again thrust voting rights issues to the forefront of the presidential campaign. On a related front, Biden, evoking John Lewis, the civil rights icon who died in July, made his most direct appeal in Kenosha to Black voters and expressed worry that they would be too discouraged to vote. He spoke of the need for greater understanding between races, and implored public schools to restructure education about Black history. Trump, he said, was someone who “legitimizes the dark side of human nature.”

“I can’t understand what it’s like to walk out the door or send my son out the door — or my daughter and worry about just because they’re Black, they may not come back,” he said to one participant in the community meeting. “I can’t really — I can intellectually understand it, but I can’t — I can’t feel it.”

While Trump, in his visit, spoke out against lawlessness, he did not meet with Blake’s family, and also has refused to denounce Kyle Rittenhouse, a White teenager accused of shooting and killing two people during the protests there.

Biden’s community meeting was held inside Grace Lutheran Church, a small brownstone structure in a neighborhood close to the city’s downtown, site of boarded-up storefronts and burned-out car lots. Speakers at the meeting expressed a wide range of perspectives that seemed designed to look at the current crisis from various angles to examine its complexity. For nearly 30 minutes at the start, Biden sat quietly at the front, listening and taking notes.

A firefighter spoke of the exhaustion his department felt after putting out fire after fire. A woman whose small business was looted recounted the despair of seeing a devastated downtown. A Black lawyer with a 20-year-old son recounted the unequal treatment in the justice system, and how, in her view, it tilted too much toward police officers.

A 31-year-old mother of three rose and said she was dispatching with her notes to speak directly to Biden.

“I’ve seen enough,” said Porsche Bennett, organizer for Black Lives Activists Kenosha. “The action we want are, hold these officers accountable to the same crimes we get held accountable to. If I was that officer, I would be [in the] Kenosha county jail right now.”

“We want the same exact rights as others. We want to be treated like everybody else.”

“Regardless of how angry you are, if you loot or you burn, you ought to be held accountable. Period,” he said. “It just cannot be tolerated, across the board.”

But Biden also directly responded to some squeamish Democrats who have pointed to declining support for Black Lives Matter protests as a warning sign against aligning with it.

“As much as they say that Black Lives Matter has lost some standing since the president’s gone on this rant about, you know, law and order, et cetera,” Biden said, “still you still have 50 percent of the American people supporting it. It was up to 78, that’s never happened before.”

Ahead of Biden’s arrival, a group of two dozen Black Lives Matter protesters marched past the church, chanting “No Justice, No Peace.” Onlookers on both sides of the road cheered them. Cars honked their support.

Police trailed the impromptu parade, using their loud speaker to order the marchers onto the sidewalk.

“This is an unlawful assembly,” an officer announced. “Please move to the sidewalk.”

The marchers ignored the calls, pumping fists and chanting.

Kenosha police continued to trail the protesters, their loud pleas calling for the protesters to disperse being largely drowned out by the chanting.

“The Kenosha police department cares about your safety,” an officer announced.

“Shut it down,” the protesters chanted.

Jameel Henderson, 24, sat on her front porch across from the church with her mother, Charisse.

“I’m more hopeful than anything,” said Charisse, 43. “Biden and Kamala Harris, they understand what’s going on. They’re here not to divide but to heal.”

Trump’s Tuesday visit didn’t interest either of them.

“He’s not for the Black people, he’s not for the community, he’s only for political stunts,” said Charisse. “He couldn’t even say Jacob Blake’s name, and he’s the president. That’s absurd.”

Mother and daughter both called for charges against the police officer who shot Blake multiple times in the back. But they fiercely oppose the sometimes violent and destructive turn the protests took.

“It was close to home,” said Jameel. “My baby was upstairs. We could see the fires. I feel so sorry for people who lost their homes and businesses.”

Ahead of the trip, Biden’s campaign released a new online ad that attempts to tell Black voters: “We’re listening.”

“Why in this nation do Black Americans wake up knowing that they can lose their life in the course of just living their life?” Biden says in the ad’s opening moments.

“Part of the point of freedom is to be free from brutality from injustice, from racism and all of its manifestations,” says Harris (D-Calif.).

The ad, part of a broader $45 million campaign, is running digitally in Wisconsin, Michigan, North Carolina and Pennsylvania, and will be on cable television starting this weekend.

The trip to Kenosha was the result of days of debate inside his campaign about whether and how to showcase his message and whether going there would be seen as politically opportunistic.

Several local leaders earlier this week urged Trump and Biden to both postpone visits, saying that partisan politics would only exacerbate raw emotions on the community.

“There’s been overwhelming requests that I do come,” Biden said, during a news conference Wednesday in Wilmington, Del., when asked about his visit. “I have gotten advice from sitting members of Congress, in the Senate as well, to go — and that I should go. I’m not going to do anything other than meet with community leaders as well as business people, other folks in law enforcement, and to see — to start to talk about what has to be done.”

Biden on Thursday also gained the endorsement of Rick Snyder, the former two-term Republican governor of Michigan, who called Trump “verbally abusive” and “a bully.”

“We will not continue to be the greatest nation in the world if we can’t get along among ourselves,” Snyder wrote in a USA Today op-ed in which he stressed the need for civility in politics.