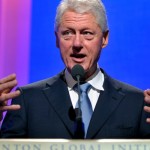 Bill Clinton says he has no regrets about his foundation taking foreign money and apparently not disclosing all of it while Hillary served as secretary of state.

“There is no doubt in my mind that we have never done anything knowingly inappropriate in terms of taking money to influence any kind of American government policy,” Clinton said, while in Africa doing work for the Clinton Global Initiative. Clinton said the foundation will “come as close as we can during her presidential campaign to following the rules we followed when she became secretary of state.”

He even raised the possibility of stepping down should Hillary win the White House.

“I might if I were asked to do something in the public interest that I had an obligation to do. Or I might take less of an executive role,” he said. “But we’ll cross that bridge when we come to it.” Read more at NBC News.