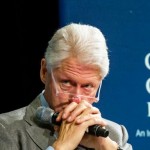 Former U.S. president Bill Clinton recalled on Monday the dizzying moments he experienced upon receiving the news that Israeli Prime Minister Yitzchak Rabin had been shot in Tel Aviv.

In an interview with Israel’s Channel 2 on the occasion of the 20th anniversary of Rabin’s assassination, Clinton told seasoned journalist Ilana Dayan, “The first thing that went through my mind when I was told he was shot, I ran upstairs to see my wife, and we literally just sat there and held each other for like 20 minutes. And I was distraught and I said I just can’t sit still anymore.”

Clinton continued, “I went back to my office, and I told my staff, just leave me alone until I know what happened. And then my [national] security adviser then, Tony Lake, opened the door of the Oval Office to walk down to me, and the minute he opened the door I knew that [Rabin] was dead. I could tell by how slumped Tony’s shoulders were. He never even had to turn around. And, my first thoughts were not even for the peace process, they were just for my friend, I just felt sick. And then immediately, I thought this could end all of his dreams.”

Clinton also told Dayan he thought the Israelis and Palestinians were within just a few months of a peace deal at the time of Rabin’s assassination. And he recollected a tense disagreement between PLO chief Yasser Arafat and Rabin, just as the media had arrived for the public signing of the Oslo Accords.

Dayan said the president underlined a “loving friendship” between himself and Rabin that ultimately helped resolve the situation.

The interview was aired less than a week before Clinton is scheduled to address a mass commemoration at the Tel Aviv square where Rabin was assassinated and that now bears his name.