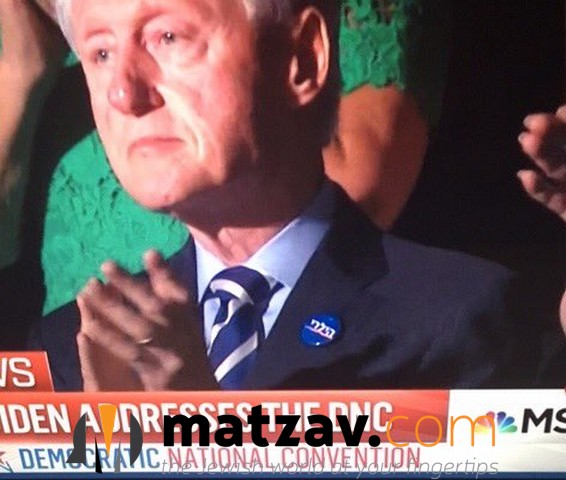 As it turns out, Tablet Mag explains, the pin was a gift from either one of two political operatives associated with the National Jewish Democratic Council. Steve Rabinowitz of Bluelight Strategies, which represents the NJDC, and who formerly worked in the Clinton White House, explained that he was at a Clinton/Gore campaign alumni event yesterday afternoon at the National Museum of America Jewish History in Philadelphia and gave his old boss the pin. Bill said he’d wear it but Steve didn’t know whether or not to believe him and certainly didn’t think he’d do it last night.

Meanwhile, Tablet Mag goes on to report, separately and without either of them knowing it, Marc Stanley, chairman of the National Jewish Democratic Council, did the same thing when he saw Clinton in the convention hall and Clinton told him he was planning to wear it.

Don’t know who gets the credit, but they were both happy.