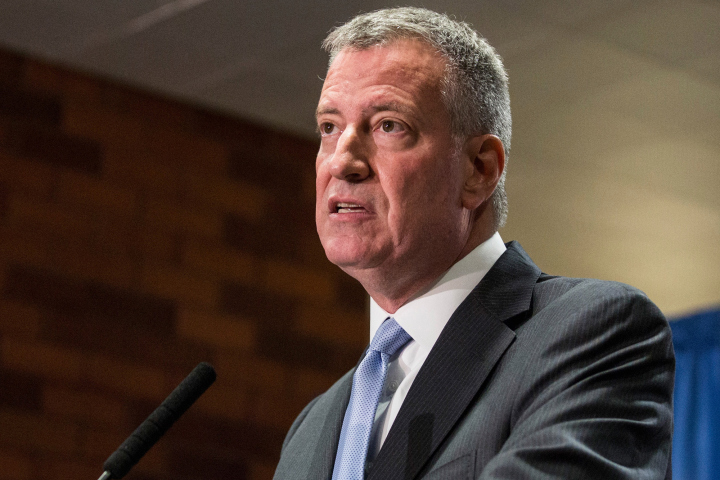 New York Mayor Bill de Blasio became the latest liberal politician to call for a balancing of security and privacy in the midst of the clash between the Apple and the Justice Department over access to a terrorist’s cellphone.

“I think the companies do owe it to the nation to come up with a procedure for providing that information for law enforcement,” de Blasio (D) said on Capitol Hill on Tuesday at a House Homeland Security subcommittee hearing.

The hearing was called to examine cuts proposed in President Obama’s recent budget to certain homeland securing grant programs that provided New York and other large cities with hundreds of millions of dollars to counter terrorist threats.

But during the questioning, Rep. Kathleen Rice, D-N.Y., who represents a portion of Long Island adjacent to the city, asked de Blasio to weigh in on the hot-button issue of strong encryption – which law enforcement officials say could cause malefactors to “go dark” and make plans for violence without any risk of authorities disrupting the plot.

The Justice Department is seeking to access a cellphone used by one of the shooters involved in December’s attack in San Bernardino. It has asked a federal judge to force Apple to write software that would defeat an iPhone feature that clears a phone’s digital contents after too many incorrect passwords, allowing investigators to rapidly test random passwords and gain access to the phone.

Apple is arguing that creating that software would risk the digital privacy and safety of tens of millions of legitimate iPhone users.

“If law enforcement doesn’t have appropriate information to pursue terror threats and other violent crime, of course, literally people would be physically endangered,” de Blasio said. “So we can’t have these two polar opposites staring at each other and not resolving the problem. What I hope there can be found is a third way, if you will, wherein the government has access to the information in a way that is provided voluntarily by these companies – obviously always with a court order and an appropriate judicial process.

“I believe there is a reasonable process that could be determined to make sure that no piece of information that could stop violence is ever withheld but at the same time respect privacy rights,” he continued.

De Blasio’s comments echoed remarks made Friday by Obama during an appearance at the South by Southwest conference in Texas. Obama declined to comment on the pending battle with Apple but argued that authorities must be able to gain access to needed law enforcement information.

“My conclusion so far is that you cannot take an absolutist view on this,” he said. “So if your bargain is strong encryption, no matter what, that we can and should in fact create ‘black boxes,’ then that I think does not strike the kind of balance that we have lived with for 200, 300 years, and it’s fetishizing our phones above every other value. And that can’t be the right answer.”

The privacy vs. safety battle over digital encryption is likely to play out in Congress over the coming months, if not years, with the bipartisan leaders of the Senate Intelligence Committee, Richard Burr (N.C.) and Dianne Feinstein (Calif.), collaborating on a bill expected to be introduced soon that would maintain law enforcement access to digital devices.

Other lawmakers remain skeptical of legislating a “back door” giving authorities access to those devices, arguing that any such vulnerability would also be exploited by hackers and other bad actors. Sen. Ron Wyden, D-Ore., in particular, has pledged to block any legislation that would weaken commercially available encryption technology.

Before addressing the Apple case, de Blasio told the subcommittee chairman, Rep. Dan Donovan, R-N.Y., that he plans to meet with Obama administration officials to argue against the Homeland Security budget cuts.

“My message is, we cannot protect New York City sufficiently without this funding,” he said. “I believe it’s a fair national priority to protect out largest city and a city that is so central to our national life. . . . We’re definitely going to be shouldering a big share of this burden, but we need our federal partners to take their part in this effort.”