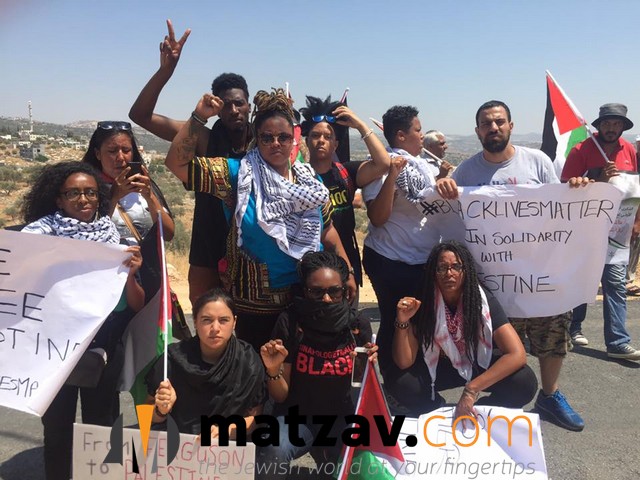 A Black Lives Matter delegation arrived from the U.S. in Israel last week to protest with Palestinian activists against Israel in the Samarian village of Bilin, near Ramallah.

“Delegates from the Movement for Black Lives join organizers and activists in Bil’in, a territory in occupied Palestine where resisters are engaged in nonviolent protest. In the fight for dignity, justice and freedom, the Movement for Black Lives is committed to the global shared struggle of oppressed people, namely the people of occupied Palestine and other indigenous communities who for decades have resisted the occupation of their land, the ethnic cleansing of their people, and the erasure of their history and experiences,” the BLM movement wrote in a Facebook post on Friday.

The BLM movement claims that police violence against African Americans is the same as Israeli police and military forces actions against Palestinians.

“In this violent, political climate, it is urgent that we make clear the connection between violence inflicted on Black people globally that is encouraged and permitted by the state and the profiling, harm, and genocide funded by the United States and perpetrated by Zionist vigilantes and the Israeli Defense Forces on Palestinian people,” the BLM movement stated.

“I would not make that comparison at all, the histories are significantly different,” Dr. Robert W. Taylor, a professor of Criminology and Public Affairs at the University of Texas at Dallas and the director of the school’s Justice Administration and Leadership Program, recently told JNS.org.