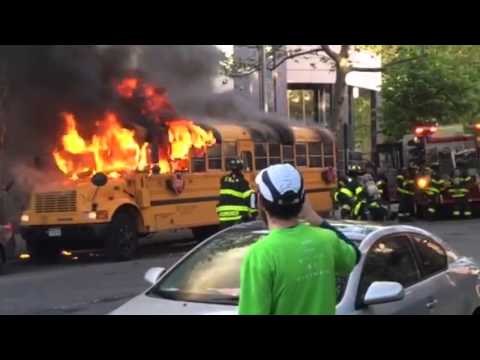 A group of young African American males set fire to a school bus belonging to a Jewish school in Crown Heights, Brooklyn, today.

At approximately 6:00 pm, the group entered a school bus which was parked on Brooklyn Avenue near East New York Avenue and started a fire inside the bus, police said.

The bus had no Jewish markings, but it was parked outside the Bais Rivkah girls school.

Bystanders’ video shows the entire bus engulfed in flame, which caused severe damage to the bus, a source from the NYPD 71st Precinct said.

Police have set up a crime scene and have notified hate crimes to investigate.

There is some video and a witness to the incident, police said.

This is the second violent incident in the neighborhood in three days, after Friday’s violent attack by a group of African American youths on a Jewish Yeshiva student.

In response, NYPD 71st Officer Vinny Martinos told COLlive, “we will be increasing Police coverage and visibility in the Jewish area. The weather is getting warmer.”