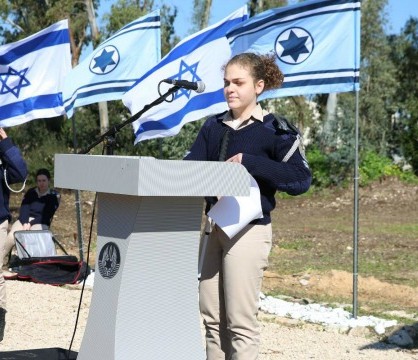 Sergeant Ori Salmon was part of an IDF project called Special in Uniform, which seeks to integrate special needs and disabled Israelis into the army.

A non-commissioned educational officer, Salmon was born blind and volunteered for the IDF despite her disability.

“Both my elder brothers, parents, and extended family all proudly served the IDF, and they all recall this period as a very special and wonderful time in their lives,” she told a group of Special in Uniform IDF volunteers.

“I never perceived my blindness as an obstacle to joining the IDF. I never imagined that I wouldn’t be able to give what I yearned to share with my country and people,” Salmon said.

“When I first arrived on base though, I did secretly harbor a fear of the unknown,” she related. “I wondered how I would be accepted by my peers, and if I would be suited to a military framework?”

“Today, after a year and a half of military service, I can say with confidence that it is not only an excellent opportunity to contribute one’s utmost to society, but also an opportunity for personal growth,” she said. “I was accepted on base with open arms, and I really enjoy the service and opportunity to meet people. I’m gaining incredible life experiences, and I bless you all that you should enjoy the same comfortable acclimation and meaningful, enjoyable service.”

“When people see me acting normal instead of pitying myself, they also treat me as an equal,” Salmon recounted.

There were difficulties on the way, however, Salmon noted. “Initially, the army needed time to digest the fact that I was introducing new concepts that had never previously existed here — like programs in Braille,” she said. “The army isn’t familiar with such programs, because they’re essentially civilian programs, and so it took time before I was able to receive a computer with the software that I required.”

“There are always challenges and hardships; life isn’t a piece of cake, but we need to be optimistic and look ahead,” she asserted. “If there’s ever something that frustrates or aggravates me, I still do my best not to reach the point of self-pity. It’ll be hard — that’s for sure. But it’s still possible to cope with any challenge.”

Lt. Col. (Res.) Tiran Attia, who heads the Special in Uniform program, said that the special needs and disabled volunteers were “strongly motivated to serve, and they invest their maximum capabilities to the army. A significant number eventually enters the army as full-fledged soldiers, as well, which is a magnificent achievement both for them and for Israeli society.”

The mother of another Special in Uniform volunteer, Yisrael Malka, who is autistic, said, “When our family learned about Special in Uniform, we understood that this was a singular opportunity for Yisrael to fill a significant role and contribute authentically to our state in a strong, supportive environment.”

“By his induction ceremony, Yisrael already felt so at home on base that we were bursting with pride,” she added. “It wasn’t just his newfound leadership abilities, diligence, or the maturity that he gained from the long months spent in the program, but also the road that the IDF itself journeyed in acquiring the compassion and understanding to make necessary adjustments in order to facilitate the contributions of those who genuinely aspire to serve.”