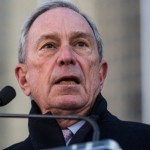 Former Mayor Michael Bloomberg insists he won’t be a presidential candidate in 2016 – but he was OK with serving as a political commentator on CBS’ “Face the Nation.”

In an interview that aired Sunday primarily focused on the opening of National September 11 Memorial Museum, Bloomberg answered a number of questions by CBS News’ Bob Schieffer about politics, too.

On whether Republican strategist Karl Rove’s comments suggesting Hillary Rodham Clinton might have suffered brain damage when she developed a blood clot in her head in 2012, Bloomberg said: “I understand political arguments. You can disagree with somebody on their views. You can even criticize their performance. But there is a line beyond which you shouldn’t go. And I thought it was about as inappropriate a thing you could say.”

When asked whether Clinton would be the best Democratic candidate for president in 2016, Bloomberg answered, “I think she would be a spectacular candidate on the Democratic side.” He added that he also has Republicans friends who might run.