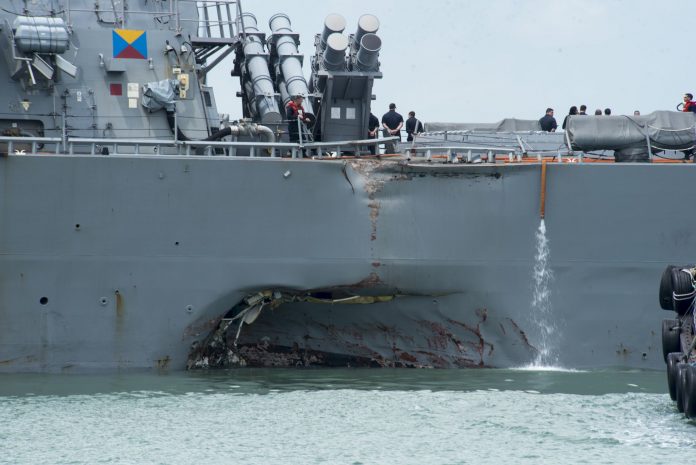 The bodies of all 10 sailors missing since a collision between the USS John S. McCain and an oil tanker off the coast of Singapore have been recovered, the Navy’s 7th Fleet said Monday.

The bodies were all recovered from within the destroyer, which was badly damaged during the Aug. 21 collision, complicating retrieval efforts. The ship is still docked at Changi naval base in Singapore.

“The incident is under investigation to determine the facts and circumstances of the collision,” said a spokesman for the Japan-based 7th Fleet, to which the McCain belongs.

The McCain, an Arleigh Burke-class guided missile destroyer, and a Liberian-flagged oil tanker more than three times its size collided before dawn near the entrance to the Strait of Malacca, one of the world’s busiest shipping lanes.

It was the fourth incident in Asia this year involving a U.S. Navy vessel, and came barely two months after a collision involving the USS Fitzgerald, also a guided-missile destroyer based at the 7th Fleet’s home port in Yokosuka, Japan. In that collision, with a container ship south of Japan, seven sailors were killed.

The collisions were remarkably similar, with the sailors being trapped inside the hull at the point of impact.

In response to this latest collision, the Navy’s top admiral last week ordered a fleetwide review of seamanship and training in the Pacific. Then, on Wednesday, the admiral in charge of the 7th Fleet was removed from his position because of his commanders’ “loss of confidence” in his ability to lead.

“In the wake of two tragic collisions, our hearts may be broken but our will remains strong,” Swift wrote on his Facebook page. “The Pacific Fleet has faced adversity before in our history, and no matter the challenge, we have overcome it.”

The Navy would “determine the causes of these incidents, we will learn from them and we will apply those lessons,” he wrote.

The McCain is named for the father and grandfather of Sen. John McCain, R-Ariz., both of whom served as admirals in the Navy.