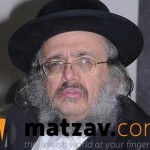 Dr. Amir Helmer is a body language expert and coach. After the brutal Har Nof massacre last year, a cousin of the two cruel terrorists was interviewed on Israeli television. The terrorist described the upbeat atmosphere, the candies that were distributed in honor of the dead “shahidim,” in a very calm and matter of fact way, Kikar News reports.

Dr. Helmer, who watched the interview, analyzed the interviewee’s body language, and he was upset. All signs pointed to a dangerous, ruthless terrorist who was capable of bringing death and destruction without blinking. He contacted various security agencies, but his wake-up call was left unheard. The Shabak allegedly interrogated him and released him. Obviously, they didn’t read into his body language as Dr. Helmer did.

Chillingly, and just as Dr. Helmer understood from his analysis, the said interviewee attacked last week, while on his way to a Bezek call on Malchei Yisroel Street. R’ Yeshaya Krishevsky, HY”D was killed, and others seriously wounded,and many witnesses to the bloody attack traumatized. The bloodthirsty terrorist was killed, and Dr. Helmer, who had forewarned, and gone unheeded, was shaken and frustrated. If only the powers that be would have heeded is warning, innocent blood could have been spared. Dr. Helmer concluded that, obviously, his cry wasn’t loud enough.

A mere two days pass, and another interview takes place. Two interviewees are asked about their feelings concerning the terror attacks. Dr. Helmer analyzes the body language of the two, and identifies one of them as a vicious killer. He cries out: another terrorist is about to attack.

This time, Dr. Helmer says, he will not relent. His findings were sent to many authorities, and he turns to the public with a heartfelt cry and warning: don’t let innocent blood be spilled. Help stop the next attack before it starts.