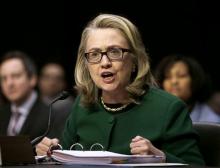 A new book out yesterday reveals that in Feb. 2010, then-Sec. of State Hillary Clinton attended a cabinet meeting with President Obama even after she had been informed that her husband Bill was to undergo an emergency procedure to repair a clogged artery.

Clinton received an emergency phone call on the morning of Feb. 11, 2010 informing her that the former president needed two stents inserted in a clogged artery at a New York hospital. But the former first lady was in Washington, D.C., where she was set to meet with Obama in one of their weekly cabinet sessions.

And according to New York Times reporter Mark Landler, who details the incident in his new book “Alter Egos: Hillary Clinton, Barack Obama, and the Twilight Struggle Over American Power,” Clinton was also struggling to find a place within the Obama administration and needed as much face time with the president as she could get. Read more at THE DAILY CALLER.