Oren Yaniv of the Daily News reports: Ads are starting to appear on one of the city’s last bastions of commercial-free space – the yellow school bus. And it’s happening far away from Madison Ave., at yeshivas in Borough Park, Brooklyn. Two cash-starved schools allowed a religious textbook publisher to turn their yellow buses into mobile billboards.”Times are extremely hard, and we need the income that comes in,” said Rabbi Mayer Weinberger, executive director of one of the schools, Yeshiva Chasan Sofer.

“Reactions were pretty positive because we screened the ad.” 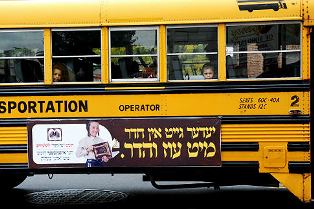 The banner, which appears on the sides of nine buses, shows a smiling boy holding a Chumash. The Yiddish caption, referring to the publisher, reads: “Everyone goes to school with Oz V’Hadar.”

“We wanted something out of the ordinary so every kid can see this book,” said Meny Hoffman of the Ptex Group, the agency that came up with the campaign.

Because there are no TVs in ultra-Orthodox homes and Internet use by kids is banned or strictly limited, his firm needed another medium, Hoffman said.

He was aware that advertisements on school buses could be a contentious issue, with parents rallying against commercialism in education.

“These are very kosher type of ads,” Hoffman said. “The concern is who’s going to monitor these ads [in the future].”

Josh Golin, director of the Campaign for a Commercial-Free Childhood, warned of a slippery slope. “Anytime you advertise in a school bus or a school setting, you are exploiting a captive audience,” he said.

But, he added, the Borough Park ads seem “very consistent with what the yeshivos are teaching in the classrooms, so it’s hard to object.”

In the mid-90s, the city allowed public service announcements on public school buses for a few years, but buses have been virtually ad-free since, according to the Department of Education.

Rabbi Weinberger said he plans to accept the ads “as long as they’re willing to pay,” provided the banners have “educational validity” and are “gentle and low-key.”

He wouldn’t reveal how much his yeshiva makes selling the bus space except to say that “it’s not a lot of money, but even a few dollars help.”