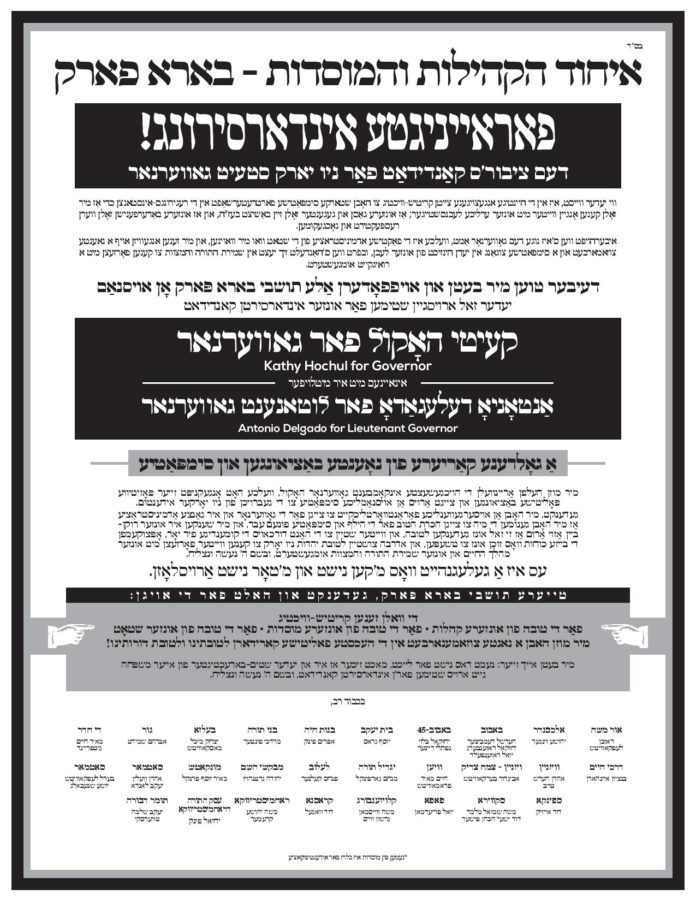 The leaders of prominent Chassidic sects and school administrators in Borough Park have endorsed Governor Kathy Hochul and her running mate, Lieutenant Governor Antonio Delgado for re-election on Tuesday.

The endorsement is signed by a coalition of congregations calling itself “Borough Park United” that includes the Bobov, Belz, Satmar, Sanz-Klausenburg, Bobov 45, Gur, Viznitz, Pupa, Svker, Spinka, Rachmastrivka, among other sects. The heads of Bais Yaakov, Bnos Chaya, Bnei Torah, Tomer Dvora, Vien and other major schools have also added their signatures.

“In these critical and challenging times, it is important to have sympathetic representation in the halls of government so that we can continue with our religious practices without interference, have our streets and neighborhoods safe and protected, and see our needs addressed in a respectful manner,” the statement reads.

The leaders stressed that Gov. Hochul has managed to develop positive working relationships with the Jewish community and has been proven as a reliable and sympathetic ally in her years in government.

The endorsement comes a week ahead of the June 28 Democratic primary for governor and lieutenant governor, giving the incumbent a major boost and locking up support in the Orthodox community, who historically have proven to be an influential voting bloc in local elections.

Recent polls show Hochul with a large lead over her primary challengers. The letter urges community members to come out to vote as a token of appreciation and to show the governor and the state’s leadership that they have earned the community’s trust and have their back.

The primary is on Tuesday, June 28. Early voting started on June 18 through Sunday, June 26.