It is with great sadness that Matzav.com reports the petirah of Rabbi Dovid Zalman Traube z”l, a 38-year-old father of seven from Monsey, NY, whose body was found in Greenwood Lake in Orange County, NJ, a short while ago.

Rabbi Traube had gone missing after attempting to rescue his ten-year-old son who had fallen into the lake during a boating outing yesterday.

The child, who was wearing a life jacket, was brought to land, as was the rest of the family, but Rav Dovid went missing.

Hatzolah and Chaveirim joined police and fire rescue units in conducting a search.

The search was suspended last night for several hours due to inclement weather, but then resumed, with the participation of the Greenwood Lake Fire Department, Hatzolah of Kiryas Yoel, New York State Police, CommSAR and others.

The niftar was found a short while ago.

He was a talmid of Yeshiva Tiferes Boruch of Springfield, under Rav Elya Meir Sorotzkin, and Yeshivas Brisk in Yerushalayim. He later also learned in a kollel under the auspices of Rav Shmulik Shapiro.

His father, R’ Chaim, passed away several years ago at the age of 67. R’ Chaim was born in a DP camp in Switzerland shortly after the end of World War II to his parents, Moshe Zev and Pessel Traube. Mrs. Traube came from a family of 11 children; she was the sole survivor. R’ Moshe Zev also came from a large family; only he and one brother survived the war.

Shortly after the birth of R’ Chaim, the Traubes were able to travel to the United States, where they settled in Omaha, Nebraska. Two more daughters were born there. The Traubes raised their children with a strong sense of identity regarding their European roots, primarily as close adherents of the admorim of Ger. Indeed, R’ Chaim lived his entire life as a European type Yid, although he was raised in America.

They took great pride in their newly-built family, as it was virtually all they had left after the war. They sent their children at the tender age of nine across the country to receive proper chinuch in New York. Young Chaim went to Mesivta Torah Vodaas, where his only relative, his uncle Rav Shmuel Yaakov Traube, was a rebbi for close to 50 years. When he reached bais medrash age, Chaim returned to the Midwest, where he attended a relatively new institution, Telshe Yeshiva in Chicago. After his marriage, Reb Chaim settled in Cleveland, where he raised his family.

Rav Dovid, from a young age, was recognized for his unique capabilities. He loved learning and grew in Torah, becoming a young ben Torah and then a bonafide talmid chochom.

His wife, Hadassah, is a daughter of Rav Mordechai Wolmark, rosh yeshiva of Yeshiva Shaarei Torah of Monsey. She is a granddaughter of noted baal tzedakah R’ Zev Wolfson zt”l.

The levayah will be held at 5 p.m at Bais Medrash Elyon, located at 73 Main Street in Monsey, NY. The aron will then be flown to Eretz Yisroel for kevurah there. 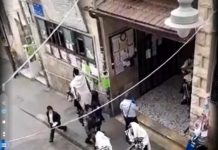 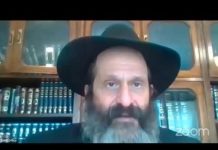