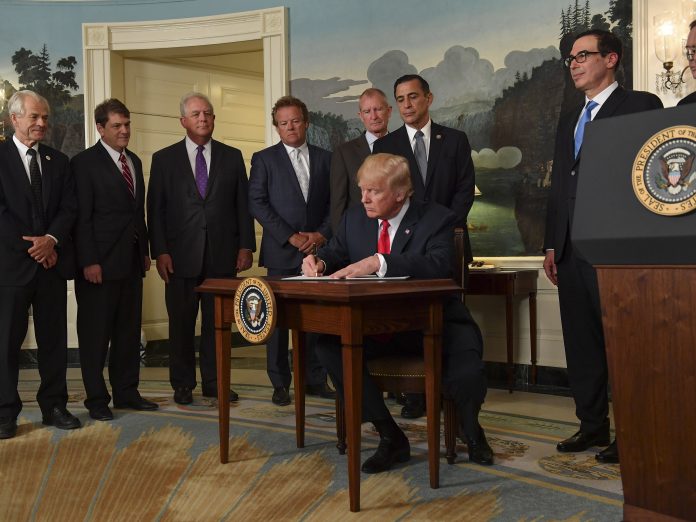 President Donald Trump granted a posthumous pardon to boxer Jack Johnson on Thursday, wiping clean his 1913 Mann Act conviction. Johnson, the first black heavyweight champion, was convicted under federal legislation that made it illegal to cross state lines with a woman “for the purpose of prostitution or debauchery, or for any other immoral purpose.” Jim Crow-era prosecutors often used the legislation as an anti-miscegenation device.

“A truly great fighter,” Trump said Thursday in the Oval Office, where he signed the pardon in a ceremony attended by boxing legend Lennox Lewis, actor Sylvester Stallone and current heavyweight champion Deontay Wilder, among others. “He had a tough life.”

Trump noted that a pardon for Johnson, whom he called “one of the greatest that ever lived,” had considerable support in Congress, including within the Congressional Black Caucus.

The president said Johnson served prison time “for what many view as a racially motivated injustice.”

Trump tweeted last month that he would consider pardoning Johnson after receiving a call from Stallone, who, according to the president, had explained the fighter’s “complex and controversial” life.

A bill requesting a Johnson pardon from George W. Bush passed the House of Representatives in 2008 but died in the Senate.

A 1,000-page education bill in 2015 included a provision requesting a pardon for Johnson. It called the boxer a “flamboyant, defiant, and controversial figure in the history of the United States who challenged racial biases.”

“We have done something today that was very important and that is, we righted a wrong,” Trump said Thursday.

“Jeff, it’s up to you,” novelist Jack London wrote before the bout, according to NPR. “The White Man must be rescued.”

Instead, Johnson pummeled Jeffries for 15 rounds in “the battle of the century” and won the belt outright.