The removal of the tefillin prompted a bomb scare aboard the plane. All 15 passengers and 3 crew members aboard were safely evacuated after the sudden landing, said airline spokesman Jim Olson.

The 17-year-old boy wearing the tefillin was traveling with his sister from New York back to Louisville.

The commuter plane that normally seats 50 passengers is operated by Chautauqua Airlines and flies under the US Airways name. The plane departed LaGuardia at 7:25 a.m. and landed in Philadelphia at about 8:50 a.m. surrounded by Homeland Security and Philadelphia Police Bomb Squad.

The passenger was removed from the plane without incident and the Transportation Security Administration (TSA) said officials said the plane was searched, with negative findings.

The passenger is a U.S. citizen, was questioned by the TSA, and was not charged.

The flight continued to its original destination, and the passenger involved in the incident was permitted to continue on the flight.

Update: The following is a photo of the boy which appeared in a video report from WLKY TV: 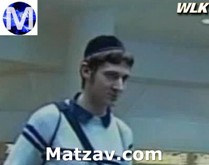 Click below for a video report of the incident: