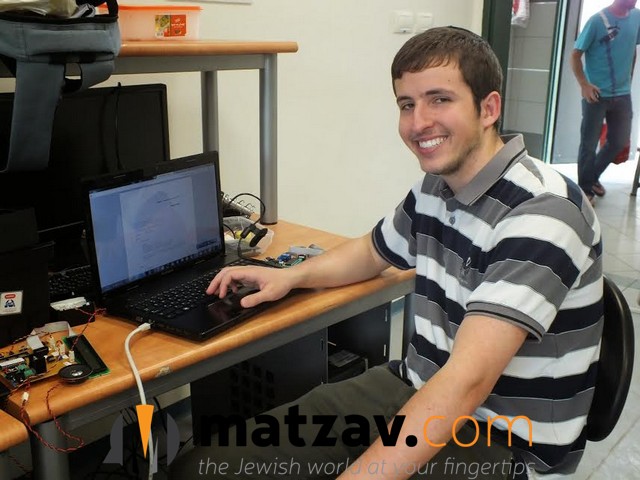 As the summer heat swelters, media sources worldwide report tragic cases of toddlers suffocating from having accidentally been left in a car. In an effort to prevent further such loss of life, Boys Town Jerusalem student Issahar Edri devised a system to alert the driver that a child is still in the car, before it’s too late. Issahar developed this all-important device as his project in BTJ’s College of Applied Engineering.

The system uses push-buttons at the base of a baby/child’s car seat to indicate whether the child is present in the car. The weight of the child presses the four buttons, completing a circuit, and signaling this data to the microcontroller. A cut-off switch conveys data that the car’s motor has been turned off. Edri has programmed the microcontroller to monitor this data and instantly trigger alerts once there are indications that a child may be left in the car. The instrument first sounds a loud warning: “Don’t leave your child in the car!” If there is no change in data within minutes, the system sets off a powerful alarm. At the same time, it automatically opens a window.

For 20-year-old Issahar, the choice of this project was highly influenced by the death of a child in his own community after having been left in a car. “I’m glad to have had the opportunity to apply the technological skills I’ve learned at Boys Town to saving lives,” he smiled. Following his graduation from the two-year College of Applied Engineering, Issahar will enlist in the Israeli Air Force where he will become an electronics specialist. “Afterwards I look forward to continuing my studies for a degree in electrical engineering. I’m hoping to be blessed to make contributions at every step of my life,” he said.