HALACHAH FROM THE DAF

Wine and other drinks

The Gemora cites the statement of Rabbi Chiya that bread exempts all foods, and wine exempts all drinks.

The Rosh and Rabbeinu Yonah disagree, and rule like Rabbi Chiya’s statement about wine.

The Shulchan Aruch (OH 174:2) rules like Rabbi Chiya’s statement about wine, saying that it exempts other drinks from both the brachahs before and after them.

The poskim discuss the details of when this applies, including whether one had to have the other drinks in mind or even present when drinking the wine. See Mishnah Berurah and Biur Halachah for a deeper discussion of the various positions on this question.

The Derech Hachayim, cited by the Mishnah Berurah (3) notes that one must have actually drank from the wine, and not just heard someone else say the brachah. Although hearing one say the brachah suffices to fulfill the obligation of kiddush, it does not suffice to exempt other drinks.

on a Tofel before the Ikar

The Rema (212:1) rules that if a person wants to make a brachah on the tofel first in order to eat the ikar, he only makes a she’hakol on the tofel since it is forbidden to eat anything in this world without saying a brachah. For example, if a person’s sole reason in eating a cracker is so he won’t drink whiskey on an empty stomach and feel ill, he should make a she’hakol on the cracker.

The source of this halachah is the Terumas HaDeshen who explains that any tofel loses its brachah completely, since it is part of the ikar. The source of the Terumas Hadeshen is from the Gemora of the radish and olive. Since the radish was eaten first, it exempts even the olive, which is one of the seven species, from a brachah. We see from this that the tofel has no importance whatsoever, thereby losing its brachah. However, if the tofel is eaten first, then its brachah is she’hakol since we must make a brachah prior to receiving pleasure form anything.

The Magen Avrohom argues, that the Or Zarua, who the Terumas Hadeshen is based on, only means that we say she’hakol when the ikar is also she’hakol, since the tofel receives the brachah of ikar, which is she’hakol. If the tofel is a different brachah and it is eaten first, of course, we must make the appropriate brachah.

Let us consider the following: A person wants to take an apple out of the apple-danish to make a ha’eitz, is he allowed to?

According to the Rema, since the tofel has no brachah, there is absolutely no reason to take out the tofel first because you are causing an unnecessary brachah of she’hakol.

Perhaps one could ask that since he wants to make a brachah on the apple first, then it is considered chaviv, preferred, and the Rema rules that something chaviv is not tofel!

There are two opinions what chaviv is. One opinion says that chaviv is a food that one always prefers. The Rambam understands that chaviv is that which one wants now. According to the first opinion, there is nothing to discuss, unless one always prefers apples to mezonos. According to the Rambam, chaviv does not contradict the halachah of tofel, since the food is tofel, it is not the one that he wants to make a brachah on first.

According to the Magen Avrohom, a food that is tofel gets the brachah of the ikar. If so, saying a ha’eitz on the apple is the wrong brachah. In truth, the Magen Avrohom (168), by the halachah of eating pas haba’ah b’kisnin during a meal, discusses whether one could take out a piece of an apple out of a danish and make ha’eitz on it. He rules that it is an unnecessary brachah. The Magen Avrohom himself is of the opinion that all foods during a meal are considered tofel to the bread except fruits etc. In that case, the fruit is brought as part of the meal. Therefore, it has no brachah of its own. It is not recommended to take the tofel and say a brachah first.

The Gemara states that the source for any measurements, interpositions and partitions are all Halacha LeMoshe MiSinai, oral laws given to Moshe at Sinai that have no Scriptural basis. Rashi cites two examples of measurements, one being the olive-measure for most forbidden foods, and second, the date-measure for eating on Yom Kippur.

Although this may seem to be a question of semantics, this query actually has some serious halachic implications. Let us consider the following scenario: What would happen if one ate slightly less than the equivalent of a date right before Yom Kippur and he is still somewhat hungry. After Yom Kippur begins, he eats a little bit more and that eating combines with what he ate before Yom Kippur to alleviate his hunger. This person has alleviated his hunger on Yom Kippur, but he has done so without eating the entire forbidden measurement of food.

That Little Piece of Bread

by the Sink in Restaurants

It is common in restaurants to leave a bowl of bread pieces by the netilas yadayim sink, so people can say hamotzi and exempt all the food they are eating with one brachah. Does this help?

The Magen Avrohom writes that if a person does not really want to eat bread, but rather, he just wants to exempt the other foods, it does not work. Since the whole reason that bread exempts food during the meal is because the foods are tofel to it, as they are considered accompaniments (like Rashi), if the bread is really not the main part of the meal, and he doesn’t even want to really eat it, then it doesn’t exempt anything else.

The Aruch Hashulchan argues that we don’t use the understanding of Rashi, rather, food during a meal is exempt from a brachah since it is a part of the meal. Sitting down and making hamotzi begins a meal, and anything that is brought during the meal is exempted, since it is part of the meal. Foods that are not brought to be part of the main meal, i.e. the meat and potatoes, like fruit, we make a brachah. If we eat bread to make a seudah, it should exempt everything.

Reb Moshe Feinstein writes that even still, if a person eats less then a k’zayis of bread, it does not create a seudah, and it will not exempt the other foods from brachos. Therefore, if a person wants to exempt other foods from brachos, he should be sure to eat at least a k’zayis, about half a piece of bread, rather than a little piece (unless you take several of them). [The purpose of the bread by the sink may also be in order that one should eat bread immediately after his washing, and that there shouldn’t be an extended interruption between the two.] 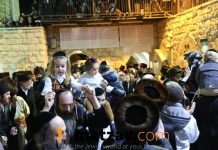 Shmitta – On the Gavra or the Cheftza?