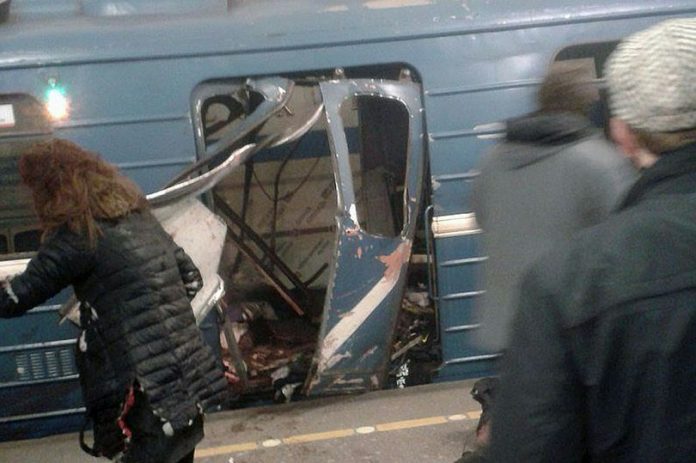 Andrei Przhezdomsky, spokesman for the National Anti-Terrorism Committee, said the explosion was caused by “an unidentified explosive device” that detonated in one of the cars as the train traveled from Sennaya Ploshchad station, one of the main interchanges of the city’s subway system, at about 2:30 p.m.

The train was able to make it to the next station, where authorities were able to reach the victims, Przhezdomsky said in remarks broadcast on state television. Amateur video shared on social media showed a train with a large, jagged blast hole in the side of one car.

Authorities have not given details of the investigation, but counterterrorism experts and others were part of the probe.

Shortly after the blast, the entire St. Petersburg subway system was shut down as a precaution, and security was boosted around the city, where Russian President Vladimir Putin was holding talks with Belarusan leader Alexander Lukashenko.

Przhezdomsky said that a second device that did not detonate was discovered at another central station, Ploschad Vosstaniya.

Earlier reports by Russian’s state-run news agency placed the death toll at 10, based on “preliminary” information.

“I have already talked to the chiefs of special services, the [Federal Security Service] director,” Putin said in televised remarks at the meeting with Lukashenko, a key Russian ally. “The law enforcement agencies and special services are working, and they will do everything to find out the causes of the incident and make a full assessment of what has happened.”

Viktor Ozerov, a member of the defense and security committee of the upper house of the Russian parliament, told the Interfax news agency that the attack had “all the characteristics of a terrorist attack.”

The area around the Sennaya Ploshchad station is famous as the setting of Fyodor Dostoevsky’s novel “Crime and Punishment.”

All St. Petersburg and Moscow subway stations have metal detectors and baggage scanners, though staff are lax about what and who gets searched.

Officers only sporadically put larger packages through a baggage scanner and permit items such as concealed cameras and tripod to pass through without additional check.

The state-run news channel Rossiya-24 reported that authorities have video of a possible suspect entering the Sennaya Ploshchad station.