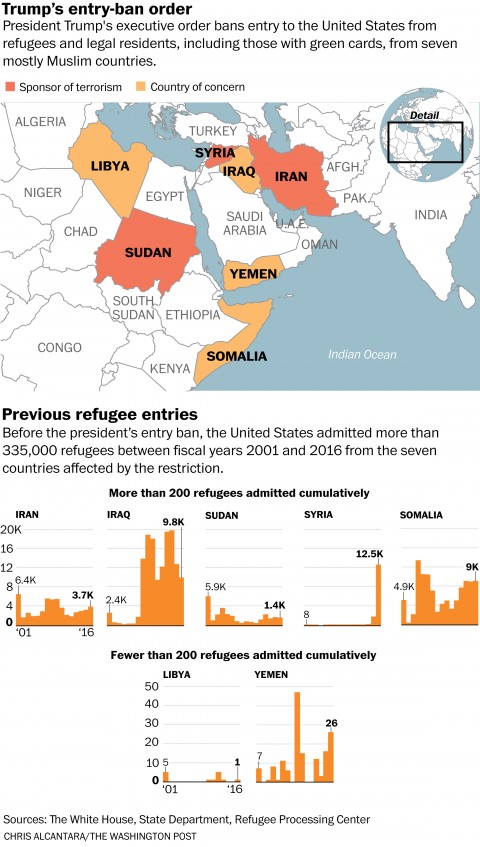 Judge Ann Donnelly of the US District Court in Brooklyn has granted a request from the ACLU to stay deportations of those detained on entry to the United States following President Trump’s executive order.

After a brief hearing in front of a small audience that filtered in from a crowd of hundreds outside, Donnelly determined that the risk of injury to those detained by being returned to their home countries necessitated the decision. She seemed to have little patience for the arguments presented by the government, which focused heavily on the fact that the two defendants named in the lawsuit had already been released. At one point, she visibly lost patience with a government attorney who was participating by phone.

Donnelly noted that those detained were suffering mostly from the bad fortune of traveling while the ban went into effect. “Our own government presumably approved their entry to the country,” she said at one point, noting that, had it been two days prior, those detained would have been granted admission without question.

In the middle of the hearing ACLU attorney Lee Gelernt informed the court that he’d received word of an imminent deportation to Syria, scheduled within the hour. That prompted Donnelly to ask if the government could assure that the person would not suffer irreparable harm. Receiving no such assurance, she granted the stay to the broad group included in the ACLU’s request.

After the decision was made, Donnelly asked the government if they could provide a list of those being detained to the ACLU. The government’s attorneys indicated that they could not. “It is more difficult than it sounds,” U.S attorney Susan Riley said.

As President Trump’s order targeting citizens from seven predominantly Muslim countries reverberated across the world today, it became increasingly clear that the controversial measure he had promised during his presidential campaign was casting a wide net.

Confusion and concern among immigrant advocates mounted throughout the day as travelers from the Middle East were detained at U.S. airports or sent home. A middle-of-the-night lawsuit filed on behalf of two Iraqi men challenged Trump’s executive action, which was signed Friday and initially cast as applying to refugees and migrants.

But as the day progressed, administration officials confirmed that the sweeping order also targeted U.S. legal residents from the named countries — green-card holders — who happened to be abroad when it was signed. Also subject to being barred entry into the United States are dual nationals, or people born in one of the seven countries who hold passports even from U.S. allies such as the United Kingdom.

The virtually unprecedented measures triggered harsh reactions from not only Democrats and others who typically advocate for immigrants but also key sectors of the U.S. business community. Leading technology companies recalled scores of overseas employees and sharply criticized the president. Legal experts forecast a wave of litigation over the order, calling it unconstitutional. Canada announced it would accept asylum applications from U.S. green-card holders.

Yet Trump, who centered his campaign in part on his vow to crack down on illegal immigrants and impose what became known as his “Muslim ban,’’ was unbowed. As White House officials insisted that the measure strengthens national security, the president stood squarely behind it.

Though several congressional Republicans denounced the order, the vast majority remained silent, and a few voiced crucial support — including, most prominently, House Speaker Paul D. Ryan (R-Wis.), who had rejected Trump’s anti-Muslim proposals during the campaign. “This is not a religious test, and it is not a ban on people of any religion,’’ Ryan said Saturday. “This order does not affect the vast majority of Muslims in the world.”

The president’s order, signed Friday, suspends admission to the United States of all refugees for 120 days and bars for 90 days the entry of any citizen from Iraq, Iran, Syria, Yemen, Sudan, Libya and Somalia. That list excludes several majority-Muslim nations — notably Turkey, the United Arab Emirates and Indonesia — where the Trump Organization, now run by the president’s adult sons, is active and which in some cases have also faced troublesome issues with terrorism.

According to the text of the order, the restriction applies to countries that have already been excluded from programs allowing people to travel to the United States without a visa because of terrorism concerns. Hewing closely to nations already named as terrorism concerns elsewhere in law might have allowed the White House to avoid angering powerful and wealthy majority-Muslim allies, such as Egypt and Saudi Arabia.

Amid widespread confusion on Saturday about how the order will be enforced, some administration officials acknowledged that its rollout had been chaotic. Officials tried to reassure travelers and their families, pointing out that green-card holders in the United States will not be affected and noting that the Department of Homeland Security is allowed to grant waivers to those individuals and others deemed to not pose a security threat. It can take years for someone to become a green-card holder, or lawful permanent resident authorized to permanently live and work in the country.

“If you’ve been living in the United States for 15 years and you own a business and your family is here, will you be granted a waiver? I’m assuming yes, but we are working that out,’’ said one official, who could not be more specific because details remained so cloudy. A senior White House official later said that waivers will be evaluated on a case-by-case basis and that green-card holders in the United States will have to meet with a consular officer before leaving the country.

But officials made clear that the federal officers detaining refugees and migrants with valid U.S. visas and restricting them from entering the country were following orders handed down by top DHS officials, at the White House’s behest.

The order drew cries of outrage from a range of activist and advocates for Muslims, Arabs and immigrants. More than 4,000 academics from universities nationwide signed a statement of opposition and voiced concern the ban would become permanent. They described it as discriminatory and “inhumane, ineffective and un-American.”

“We want to know who is being detained and why they are being detained,” McAuliffe said. “I remind everybody we are a land of immigrants. . . . Discriminatory tactics breed hatred.’’ His remarks were cheered by demonstrators holding signs saying “Refugees welcome here” and “Stand with Muslims.”

In New York City, lawyers for two Iraqi men detained at John F. Kennedy International Airport — one of whom served the U.S. military mission in Iraq — filed a federal lawsuit challenging the order as unconstitutional. They also are seeking class certification so they may represent all refugees and visa-holders who are being held at U.S. ports of entry.

While immigration advocates said at least one refu­gee family had been detained at San Francisco International Airport, there was no immediate count of how many refugees were being held at airports nationwide. Advocates said that ticketed passengers also had been barred from boarding U.S.-bound flights overseas, and they confirmed that some green-card holders who left the United States have been unable to return.

In Cairo, airport officials said seven U.S.-bound migrants — six from Iraq and one from Yemen — were prevented Saturday from boarding an EgyptAir flight to JFK Airport, according to the Associated Press.

Other advocates promised further legal challenges. The Council on American-Islamic Relations (CAIR) denounced the order and said it would file a lawsuit challenging it as unconstitutional.

“There is no evidence that refugees — the most thoroughly vetted of all people entering our nation — are a threat to national security,” Lena F. Masri, CAIR’s national litigation director, said in a statement. “This is an order that is based on bigotry, not reality.”

In a conference call with reporters, immigration lawyers and advocates said Trump’s order violated the Constitution, along with U.S. and international laws that guarantee migrants the right to apply for asylum at the border and the Immigration and Nationality Act, which forbids discrimination in the issuance of visas based on race, nationality, place of birth or place of residence.

But Mark Krikorian, executive director of the Center for Immigration Studies, which advocates for lower immigration levels, praised Trump for taking action to pause the refugee resettlement program and limit immigration from the seven countries.

“It’s a prudent measure,” he said. “It’s not the end of the world. It’s not the Statue of Liberty crying. The reaction has been hyperbolic.”

The effects of Trump’s order played out nationwide.

In Dallas, Behzad Honarjou, 43, was supposed to pick up his mother, 70-year-old Shahin Haffanpour, at the airport on Saturday. But when she arrived from Iran via Dubai, she was told that because of the executive order she would be sent back to Iran the next morning.

“I don’t know what to do,” Honarjou said. He said he was seeking an attorney to file an emergency habeas petition, but the courts were closed. Haffanpour has an immigrant’s visa issued by the U.S. Embassy in Ankara, Turkey, last year.

In Philadelphia, Sarah Assali said six relatives from Syria — two uncles, their wives and two cousins — were detained after arriving at the airport there early Saturday. Although they are Christian immigrants with valid visas to join family in this country, they were put on a plane back to Doha, Qatar, three hours later, Assali said.

She said her family members were not allowed to call or contact their family in the United States before being removed. “We don’t know what’s going to happen next.”