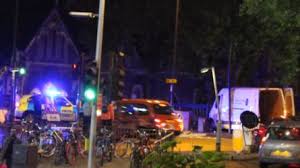 British Jews reacted with horror to Saturday night’s terrorist attack on an area of London known for its teeming bars, restaurants and night clubs – the third such outrage on UK soil in the space of ten weeks – calling as well for heightened vigilance at synagogues and other community buildings.

The Community Security Trust (CST) – which works closely with the police and other authorities to ensure Jewish communal security – noted in a statement that “These attacks are at a time of many warnings from Police and Government regarding the high level of terrorist threat.” In the wake of Saturday night’s attack, British authorities raised the threat level from terrorism to “severe,” meaning that the prospect of yet another assault is “highly likely.”

The CST stressed that it had no specific information about a planned attack on Jewish institutions, but urged communal officials to “fully implement” existing security measures. A list of necessary security procedures included an instruction to “Prevent ‘tailgaiting’ – stopping someone close behind you attempting to gain access to the building when gates or doors are opened.”

Seven people were killed and nearly 50 others injured during Saturday night’s attack, when a van rammed into pedestrians on London Bridge. The three terrorists in the van then climbed out and ran to nearby Borough Market where they began stabbing people. Within eight minutes, armed police officers were on the scene, shooting all three terrorists dead. Eyewitnesses reported that the terrorists were screaming “this is for Allah!” as they attacked. The terrorists also wore fake suicide bomb vests.

The Metropolitan Police announced on Sunday afternoon that 12 people had been arrested in connection with the attack, following a raid on a flat owned by one of the terrorists in Barking, on the outskirts of east London.

British Chief Rabbi Ephraim Mirvis reflected with sadness that the London Bridge attack had followed a similar Islamist attack on Westminster Bridge on March 22, in which four people died, as well as the suicide bombing of an Ariana Grande concert in Manchester on May 22, in which 23 people, many of them children, were killed.

“After Westminster and Manchester we stood together defiant,” Rabbi Mirvis said. “Yet it seems the terrorists believe that where they have previously failed to poison our communities, with their destructive ideology of hatred and prejudice, they can succeed with still more bloodshed and murder. But we must not let them.”

Gillian Merron – chief executive of the UK Jewish Board of Deputies (BOD) – said: “We condemn last night’s terrorist incident in the London Bridge area in the strongest terms. Our thoughts and prayers are with the victims and our gratitude is with the emergency services. People of all faiths and none must come together to defeat this evil.”

The London Bridge attack came five days ahead of Britain’s much-anticipated General Election. The government has confirmed that the June 8 poll will go ahead.