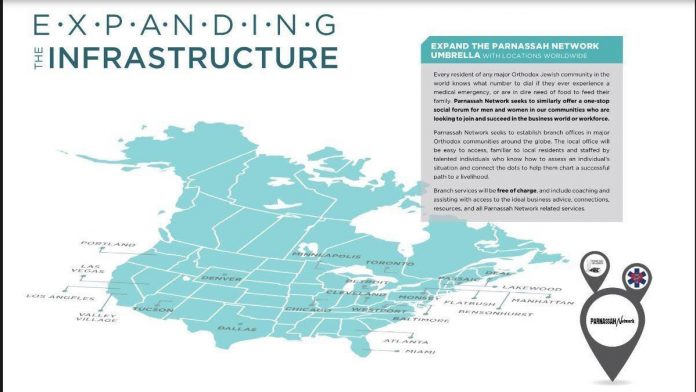 A new era of Jewish activism has dawned.

The orthodox Jewish community has never been one to sit on its laurels, waiting for success to land in its lap, or for relief to come knocking. In addition to our prayers, hope, and faith, we have always turned to activism as well.

Whether it was R. Shimon bar Yochai lobbying the Roman empire, the Rambam cultivating a relationship with the Sultan, or the Vaad Hatzala campaigning to save Jewish souls during, the holocaust, we always did whatever we can to work towards bettering our situation.

Today is no different. We have, among others, Agudas Yisroel working the political spectrum, Torah Umesorah looking every child and student, and a large number of medical referral and advocacy groups caring for the sick and their families.

Just one thing has been missing, until now.

For too long, there was no one to work on behalf of parnassa.  No organization took responsibility for the all-important mission of helping orthodox families make ends meet. No one lobbied for bread on the table; no one worked to relieve the desperate stress of empty wallets and fridges, of troubled eyes and gnawing stomachs. We gave money; but we didn’t address the problem.

The Orthodox Jewish Chamber of Commerce (OJC) has stepped in to fill this void.

There can be no accomplishments, no goals reached, differences made, or lives well lived, unless one’s basic needs are met. Im ain kemach ain Torah. The OJC is here to empower every person in the community to move past the concerns of parnassa. For people on every level; the OJC has a program to help; for job seekers, startups, small businesses, large corporations, those looking to hire, and more.

Economic development. Business networking. Assisting startups and existing businesses. Empowering individuals. Advocating at the highest levels of government. Building bridges between entrepreneurs across communities and nations. The OJC is the network that connects them all!

OJC Founder and CEO Duvi Honig is a businessman turned activist by his overriding passion for one concept- help people help themselves. A successful real estate entrepreneur, Honig noticed many community member struggling for basic parnassah. He set out to do something about it, creating the concept of Parnassa Network.

“We don’t give people jobs,” Mr. Honig stressed. “We empower people to be able to create and access their own sources of parnassa.” Parnassa Network founded the concept of business networking, creating economic opportunity by connecting people with interests and skills that are mutually beneficial.

At the first job expo created by the organization, over 500 people stormed the doors in search of employment opportunity. Since that evening, Honig’s activism has taken off, spawning additional divisions, as new communal economic needs were identified.

The original network is now called the Orthodox Jewish Chamber of Commerce, a global umbrella of businesses come together to form committees and programs to help each other thrive. The Chamber hosts the Parnassah Expo, Jbiz B2B Expo, the NYC Expo, educational seminars, Small Business Alliance meetups, a business development fund, an educational foundation fund, a job board, and organization helping women in the workforce, and a US/Israel business alliance.

Each of these is a tool empowering individuals and businesses achieve their goal of earning a respectable living for themselves and their families.

All the OJC events and services are provided by elite experts and professionals, many of whom are professors and CEO’s of successful companies.

The OJC has garnered a lot of attention from the halls of power in the United States and abroad. “It’s all about the buck,” Honig says. “Politicians and CEO’s see that we can deliver the promises they have made to their constituents, and they contact us. They understand the unique economic power of Jewish business.” The Chamber and its leadership have close personal relationships with the highest echelons of White House, Congress, Knesset, and national governors, mayors, and international Prime Ministers.

The Chamber’s public policy committee utilizes the power of the business world to influence policy, successfully lobbying for many local interests. It successfully lobbied the Knesset to drop legislation that would affect shabbos observance. Its anti-BDS division targets UN antisemitism and those who would harm Jewish financial interests around the globe.

“The network we built over the past ten years intertwines the world,” Honig said. “It makes the big world, small. Yet it is by far the biggest infrastructure built, beyond any physical building -including the Freedom Tower- since the recession.”

Honig and the Chamber are the catalyst for major business opportunity around the world, yet he says  there is still much to be done. The OJC has hopes to do that for much more local residents, he says. Too many people are struggling and asking for handouts, and are not accessing the tools he can help them attain.

The Chamber and it’s projects have never advertised their services, and never fundraised. Honig supported the organizations primarily from his own pocket, with help from unsolicited corporate sponsors. He refused to fundraise, for fear people would not turn to a ‘charitable organization’ for empowerment.

What is Honig’s dream? He would like to see the OJC have a team of caseworkers that can assess every individual who contacts the network, helping to identify his strengths and weakness, likes and abilities, and connect him to the opportunities that fit him. The OJC will be the frum organization that deal with many communal issues on the parnassah level, much as the Agudah and Torah Umesorah deal with them from the political and educational perspective. Honig views the Chamber as a painting, carefully constructed over the past 10 years, finally ready to be rolled out to the benefit of the orthodox Jewish community.