A bus driver for a yeshiva in Brooklyn, NY, was arrested today and charged with abandonment of a child after allegedly leaving a two-year-old boy locked in a bus for several hours, police said.

The toddler was seen by passersby standing in the stairwell of the parked bus and screaming at about 10:30 a.m. on Bedford Avenue in Williamsburg. Police officers found the front doors of the 2007 Thomas Built bus locked with a chain, but they were able to get inside from the unlocked rear door.

The boy was taken to Woodhull Medical Center on Broadway, where he was found to be in good condition and was released to his mother.

Local residents located the driver who told officers that he had checked the bus before locking it.  A law enforcement official said the bus driver had a valid license with school bus certification.

Police arrested the driver and charged him with abandonment of a child.

A law enforcement official said that the bus was registered to a cheder in Williamsburg. 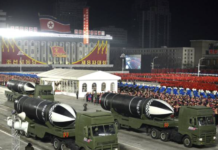 Trump Plans To Move To Mar-A-Lago After Presidency