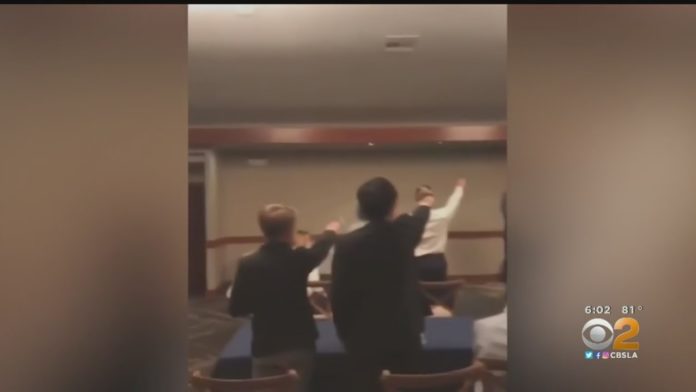 Rep. Alan Lowenthal (D-Calif.) condemned on Wednesday a group of 10 or so members of the boys’ water-polo team at Pacifica High School in Garden Grove, Calif., which is part of his district, who were caught on camera doing a Nazi salute and singing a Nazi song last year during an awards ceremony.

“This disturbing incident saddens me greatly,” Lowenthal, who is Jewish, told JNS. “We as a community must face uncomfortable facts, and ask hard questions about hatred and ignorance in our midst. I can only hope that this can become a teaching moment—not just for the students who participated, but for the entire student body on the horrors of the Holocaust and the evils of the Third Reich.”

The Los Angeles Museum of the Holocaust has invited the students from the awards ceremony to tour the museum and interact with Holocaust survivors. It also plans to invite those boys depicted in the video, which was first reported by The Daily Beast on Monday.

“Flashing Nazi salutes and singing Nazi songs is contemptible,” said Lowenthal. “These are not issues to joke about, use for shock value or be taken lightly. I sincerely hope that this lesson is instilled in these students by both the school district and by their parents.”

Pacifica High School in Garden Grove, Calif. Credit: Screenshot via Google Maps.
The Garden Grove Unified School District and the high school condemned what occurred in which the school administration was unaware of the video until March, when “school administrators took immediate action and addressed the situation with all students and families involved,” said the district, without specifying how the students were disciplined, citing the Federal Educational Rights and Privacy Act.

“I also hope that we as a community can learn from this incident and others like it recently, that we must all remain ever vigilant in the face of a resurgent and emboldened white-supremacy movement that is always looking for new recruits,” added Lowenthal. “These hateful ideologies are a threat to the fabric of our country and our society.”

California Sen. Dianne Feinstein, who is also Jewish, and Sen. Kamala Harris, both Democrats, did not respond to a request for comment.