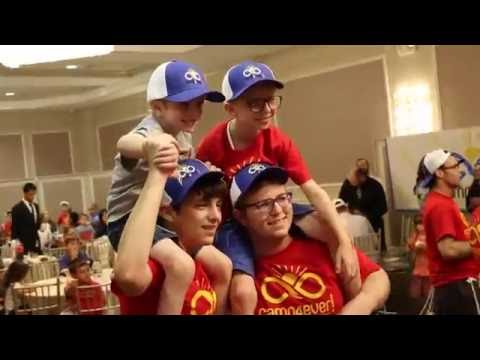 After their electrifying welcome and departure party in Lakewood, Camp4ever’s busses, instead of heading south towards their Orlando destination, turned north to Passaic, NJ. Binyomin Novak and his two brothers were excited and looking forward to attending Camp4ever, but Binyomin’s bar mitzvah was the same night that camp would be starting.

Binyomin’s mother Nancy had called Chai4ever and said, “You cannot leave without my kids.”

Chai4ever said they would send a volunteer to pick up the boys after the bar mitzvah and try to catch up with the busses. Camp4ever wasn’t about to let three of its campers miss out on the start of camp, though, so the entire camp – hundreds of campers and counselors – surprised the Novak family by turning up to sing, dance, and bring simcha to the bar mitzvah celebration.

After the party was over and all Camp4ever’s campers were accounted for, the adventure could begin.

A guest at the bar mitzvah told Rabbi Shmuel Zaks, executive vice president and founder of Chai4ever, that “the Camp4ever bar mitzvah was the most moving experience of his life.”