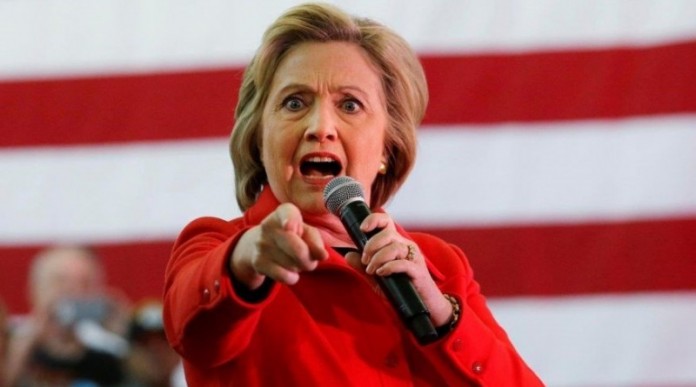 Hillary Clinton’s weekend interview with the FBI stands as a perfect symbol of what is probably her biggest liability heading into the fall election: A lot of people say they don’t trust her.

Clinton sat for an interview of more than three hours as part of a Justice Department investigation into the privately owned email system she operated off the books when she was secretary of state. The timing – less than three weeks before she will claim the Democratic presidential nomination – is an attempt to make the best of a situation that would look bad for any candidate but is particularly damaging for Clinton.

That the interview at FBI headquarters was voluntary does not expunge the whiff of suspicion surrounding the entire email affair that, for many voters, confirms a long-held view that Clinton shades the truth or plays by her own rules.

In opinion polls and focus groups, even many people who say they plan to vote for Clinton say they think she has lied or has something to hide. Her poor marks for trustworthiness have much to do with her long and sometimes messy public life, and very little to do with Republican opponent Donald Trump. Both front-runners are deeply unpopular with voters, but Clinton elicits a more visceral mistrust.

It didn’t help matters last week when her husband, Bill Clinton, met with Attorney General Loretta Lynch for an impromptu discussion on an airport tarmac in Phoenix, sparking suspicions among Republicans and head-slapping among Democrats. Lynch has said the meeting was innocent but regrettable.

“Trust is the glue that holds our democracy together,” Clinton said last week as part of a direct effort to address the issue in this small lull between the end of primary voting and the start of full-on campaigning for the fall vote.

“I take this seriously, as someone who is asking for your votes, and I personally know I have work to do on this point,” Clinton told a friendly audience. “A lot of people tell pollsters they don’t trust me. I don’t like hearing that, and I’ve thought a lot about what’s behind it.”

As she has before, Clinton blamed smears by her political opponents for setting the tone, but she also acknowledged her own mistakes.

“You know, you hear 25 years worth of wild accusations, anyone could start to wonder,” Clinton said. “Political opponents and conspiracy theorists have accused me of every crime in the book. None of it’s true, never has been,” but it also never goes away, Clinton said.

“And it certainly is true that I’ve made mistakes. I don’t know anyone who hasn’t,” Clinton continued. “So I understand that people have questions.”

She promised to try to resolve those doubts through hard work and dedication, and she held up the example of her 2000 election to the Senate. New York voters had doubts, too, but came to know her as a hard worker and effective representative, she said.

“You can’t just talk someone into trusting you. You’ve got to earn it,” Clinton said.

The longtime front-runner is trying to swab the decks of a messy and bitter primary ahead of the Democratic convention and ahead of a week of high-profile campaigning with President Barack Obama and Vice President Joe Biden.

Biden, in an NPR interview Sunday, said a goal in campaigning for Clinton was to “vouch” for her. The two will appear together Friday in Scranton, Pennsylvania, which is Biden’s beloved hometown and also where Clinton’s father grew up. Her story of the family lace factory there is a staple of her stump speech.

“The hardest thing is vouching. When you vouch for them you say ‘I’m putting my reputation on the line. I believe this person is a good person, has character,’ ” Biden said in the interview for NPR’s “Weekend Edition.” “You’re putting your rep on the line. You’re saying, ‘I think this person has character,’ and that’s what I’m prepared to do for Hillary.”

Character is exactly Clinton’s trouble spot, according to polls that have charted an increase in the number of people who say they don’t like and don’t trust her as the campaign has marched ahead.

In an NBC/Wall Street Journal poll in late June, 69 percent of respondents said they were concerned that Clinton has a record or reputation as untrustworthy. A CBS News poll in June found 62 percent saying Clinton is not honest and trustworthy, while 33 percent said she is. Her ratings on this were similar to Trump’s (63 percent not honest, 32 percent honest). But on a separate measure of being forthcoming, 33 percent of registered voters said Clinton says what she believes while 62 percent said she does not. By contrast, 56 percent said Trump says what he believes.

People are far more likely to say Clinton is well prepared for the job, while rating Trump as unsuited for the White House, said pollster Peter Hart, who oversaw the latest NBC-Wall Street Journal poll. Where she falls down is on the more nuanced question of character and trust, he said.

“For Hillary Clinton it’s all personal and about values,” Hart said. “It’s, ‘Can I trust her? Do I feel comfortable with her?’ ”

This is somewhat familiar territory for Clinton, who overcame discomfort over her hands-on role as first lady in the 1990s and mistrust of her motives in the 2000 Senate campaign.

“When she won election to the Senate, she had to overcome skepticism in the minds of some voters in certain parts in New York,” campaign press secretary Brian Fallon said in an interview. “She went on to impress everyone with her work ethic and her ability to reach across the aisle, and then managed to win reelection by an even wider margin in 2006. So we know that while the political season brings out all kinds of personal attacks and unfair questioning of her motives, the reality is, once in the job, she never fails to work her heart out and earn respect from even her critics.”

Still, although the old scandals and investigations of the Bill Clinton administration have faded in memory, they are at the core of many voters unease with Hillary Clinton. Trump, in his name-calling style, hits a political nerve with his constant reference to Clinton as “Crooked Hillary.”

Her well-regarded tenures as senator and secretary of state are also years behind her, meaning her campaign must seek to remind voters of the positive elements from those periods.

Clinton’s campaign is trying to address the trust deficit in two main ways. First, through Clinton’s own words and actions – including her remarks on the topic at the Rainbow PUSH Coalition gathering in Chicago last week and in what her backers say was a forthright attempt to provide information to the FBI.

Clinton had volunteered to sit for an interview months ago and has said she is cooperating completely in an inquiry that could result in criminal charges for her or aides who sent and received classified material on a system that operated in parallel to government email accounts.

From the campaign’s perspective, the interview is medicine best swallowed now, before the full heat of the head-to-head campaign with Trump. The issue clouds the campaign nonetheless, since there is no word yet on whether anyone will face charges or discipline. An interview with the most significant potential target of the investigation is often the last step before a decision on whether to issue indictments, so it is possible that the legal matter is near an end. Lawyers have said charges against Clinton are unlikely.

The Republican-led House investigation into the deaths of four Americans in Benghazi, Libya, when Clinton was secretary of state, ended last week with little new or politically damaging information. Clinton backers assert that the tragedy is no longer politically useful for Republicans.

Second, the campaign is spending millions on television advertising that charts Clinton’s background as an advocate for children and families and portrays her as a stalwart fighter. The positive ads airing in battleground states are running much more frequently than an attack ad about Trump.

The idea is that there is an opportunity now to reset voter opinions about Clinton as a stand-alone proposition as opposed to someone in contrast with Trump. Clinton allies note that Trump’s negative ratings are higher than Clinton’s and have concluded they are less likely to change than Clinton’s positive ratings. To Clinton backers, that means it is more cost-efficient to try to raise her stature now than to further damage his.

Super PACs allied with Clinton have begun rolling out potentially damaging information about Trump’s business practices, while the campaign itself concentrates on trying to tell voters what backers have described as “something they don’t know” about one of the best-known figures in American public life.

“Every election is a choice, and we will continue to frame the contrast in this race, and to explain why Donald Trump is temperamentally unfit to be president,” Fallon said. “But we believe in giving voters a sense of Secretary Clinton’s own vision and values, not just emphasizing how Trump is so dangerous and divisive. These early weeks of the summer provide that opportunity, as impressions begin to set.”

A larger problem, however, is that Clinton has always been more popular, and viewed as more trustworthy, when she is doing a job than when she is campaigning for one.

“The campaign trail is just not designed to help her with her trust issues,” said Patti Solis Doyle, who managed the first portion of Clinton’s failed 2008 presidential campaign and is now a prominent supporter.

“Having said that, I think it is important for her to acknowledge that she has trust issues and to tell voters that she will work to earn their trust,” she added. “It shows that she is in tune with the public and can recognize her flaws. This is not something she would have done in ’08. Voters appreciate the honesty and self-reflection.”