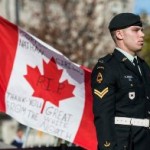 Three days after a man shot dead a soldier and rushed into Canada’s Parliament Hill, the site reopened for visitors today.

The radical’s attack was the second on the country’s military in a week by Canadian citizens who had recently converted to Islam, though they appear to have operated independently, according to police.

Parliament Hill had been closed since Wednesday, but reopened to scores of visitors on Saturday with only a light police presence and flags flown at half-mast. Though the building itself is still closed, House Speaker Andrew Scheer said the building would reopen for tours and visits on Monday. Read more.