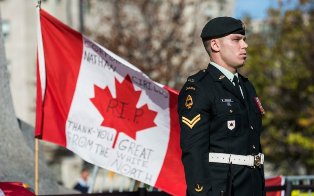 The Federal Court of Canada was asked this week to reschedule the country’s national elections, scheduled for Oct. 21, the same day as the Yom Tov of Shemini Atzeres.

“Observant Jews are still going to be able to cast their ballots, as there are four days of advanced polls, although not so easily, since one of them falls on a Friday, a second on a Saturday, the third on the eve of the Jewish holiday of Sukkot, and the fourth on the first day of Sukkot itself. Special ballots generally used by armed forces abroad and prison inmates are also available to religious Jews,” reported The Jerusalem Post.

According to Global News, “By law, eligible voters are required to have three consecutive hours to vote on election day. If a person’s work hours do not allow for such a time period, employers are legally obligated to give voters time off work in order to cast their ballot, however this does not apply to advance polling dates.”

“As we await the court’s decision, one fact remains: There are sufficient alternative voting options available to ensure every observant Jew can exercise their democratic rights,” stated Shimon Koffler Fogel, president and CEO of the Centre for Israel and Jewish Affairs (CIJA), in a Jewish community-wide email. “The challenge is for our community to be aware of those options and to actively seize these opportunities, just as we would other accommodations—be they seeking out kosher food or exam rescheduling.”

Canadian political pundit Neil Macdonald told JNS that “the election date is set by law. In a country as multicultural as Canada, I suspect all the religious holidays combined number more than 100. Happily, it’s a secular state.”

Were the date not to change, Chani Aryeh-Bain, the Conservative candidate in the federal electoral district of Eglinton-Lawrence, which covers parts of Toronto, and Ira Walfish, a volunteer for Aryeh-Bain, would be unable to campaign and connect with voters.

They are asking for the date to be pushed to Oct. 28.

“Holding the federal election on a date where a religious minority cannot vote by reason of their beliefs sends a message to that community that it does not count,” lawyer Colin Feasby told the federal court on Tuesday. JNS.ORG