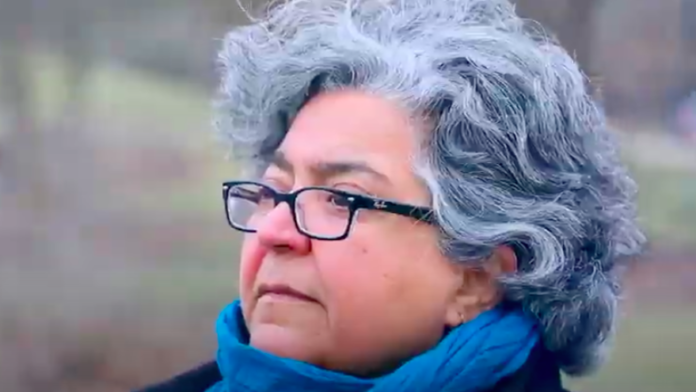 A candidate for Ann Arbor City Council in Michigan has come under fire for her anti-Israel activism.

Mozhgan Savabieasfahani, an Iranian native and environmentalist, has called for boycotts of Israel and staged anti-Israel protests outside of Ann Arbor’s Congregation Beth Israel, where every Saturday for the last 16 years, a group of protesters has harassed congregants outside the synagogue. Protesters have placed signs in front of the synagogue that say “Jewish Power Corrupts,” “Zionism is Racism” and “RESIST Jewish Power,” among other statements.

A federal lawsuit has been filed against the protesters and the city of Ann Arbor.

Savabieasfahani has taken part in the protests, “often wearing a sandwich board depicting a swastika, likening Israel to Nazi Germany,” according to a June 26 statement by the Michigan Democratic Jewish Caucus (MDJC), which also accused Savabieasfahani of “railing against the Jewish state in extreme terms before” the Ann Arbor City Council.

“Blaming American Jews for policies (real or perceived) promulgated by the State of Israel, as protesting a synagogue would imply, is patently anti-Semitic,” said MDJC.

“Consistent with Savabieasfahani’s anti-Semitic behavior is her recent promotion of a deeply offensive cartoon on Facebook depicting one of her primary opponents, Jen Eyer, standing in a wallet, holding wads of cash and receiving money from a pig holding a cigar,” continued MDJC. “While the use of pigs in anti-Semitic rhetoric is age-old and clearly identifiable, Savabieasfahani expounded on her dog whistle by deriding prominent Jewish supporters of her opponent.”

Joan Lowenstein, Washtenaw County chairwoman of the Michigan Democratic Jewish Caucus and treasurer for Eyer’s campaign, stated that “Mozhgan Savabieasfahani’s hate-filled candidacy for Ann Arbor City Council is an affront to the universal values so integral to this city, as one of Michigan’s great intellectual centers.”

The Ann Arbor election is scheduled to be on Aug. 4.