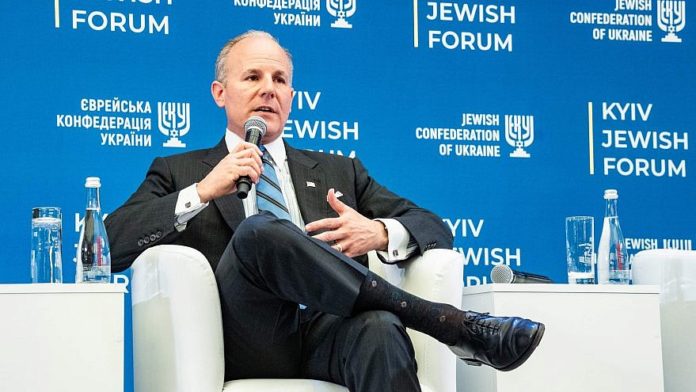 U.S. Special Envoy for Monitoring and Combating Anti-Semitism Elan Carr said on Wednesday that Jewish institutions, including shuls, should have armed security.

“We live in a time of danger,” Carr told Jerusalem Post editor-in-chief Yaakov Katz in an interview at the Global Coalition 4 Israel Conference. “Any synagogue, every JCC should have guards. God willing, may they never be needed, but they should be there.”

“The rhetoric of the president couldn’t be clearer. Every time the president speaks on this issue, he calls it [anti-Semitism] a vile poison that must be rooted out,” said Carr.

He also remarked that the president has clearly said that “if you go after the Jews, we’re coming after you.”

However, the special envoy said that the fight against Jew-hatred must be “a joint bipartisan fight.”

“All decent people—Jewish and not Jewish—need to do it together,” he said. “I don’t care what ideological clothing it wears, Jew-hatred is Jew-hatred; we need to fight it and oppose it, and that’s got to be the message.”

Also on Wednesday, the Senate Homeland Security & Governmental Affairs Committee approved bipartisan legislation to allocate $75 million annually between 2020 and 2024 for the Department of Homeland Security’s Nonprofit Security Grant Program, which provides grants to nonprofits and faith-based organizations to help secure their facilities against a potential terrorist attack.