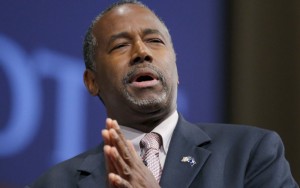 Ben Carson told an ABC News reporter on Monday that he “saw the film” of American Muslims cheering after the World Trade Center fell on 9/11, a claim perpetuated by recent statements from Donald Trump.

His reference to a “film” is allegedly U.S. news coverage from around the time; though no such film has been known to exist.

Although if they want to find film, they can look for the clips of Palestinians cheering on 9/11 as thousands of Americans were killed.