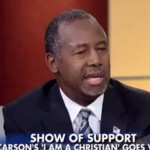 [Video below.] Ben Carson seemed to suggest on Fox & Friends Tuesday that victims of the Oregon shooting last week didn’t do enough to protect themselves.

“I would not just stand there and let him shoot me,” Carson said. “I would say, ‘Hey guys, everybody attack him. He may shoot me, but he can’t get us all.'”

He also took issue with President Obama’s politicizing of the shooting saying “When do we get to the point where we have people who actually want to solve our problems rather than just politicize everything? I think that’s what the American people are so sick and tired of.” Read more at The Huffington Post.