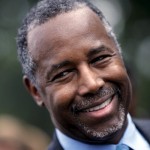 Republican presidential candidate Ben Carson is defending comments in which he said an armed Jewish population could have stopped the Nazis.

The retired pediatric neurosurgeon, who is surging in Iowa, said during an interview on NBC’s “Meet the Press” on Sunday that he’s heard from many people in the Jewish community, including rabbis, who told him he was “exactly right.”

“I think, you know, some of the people in your business quite frankly who like to try to stir things up and try to make this into a big, horrible thing,” he told host Chuck Todd. “If I say something about something that we don’t want to become and we never even want to get close to it, then I’m comparing it and I’m saying we’re there. That’s what they do. And, of course, for people who aren’t really thinking deeply, you know, that resonates. But, you know, the fortunate thing is a lot of people really do think for themselves, as you can see, you know, from the poll numbers here.”

“Well, look at the whole context in which I have said that and which I have written about that,” he added. “I wrote about societies, before tyranny was able to take root, that the tyrants tried to rid the people of the mechanism to defend themselves. So it was said in that context.”

Carson said it is “generally agreed” that it’s much more difficult to dominate an armed population.

“You know, some people will try to take that and, you know, make it into an anti-Jewish thing, which is foolishness.”

Carson also said there should be no compromises on the Second Amendment.

“Noah Webster said that America would never suffer under tyranny because if people were armed. So we need to keep that in mind. Of course, we should be thinking about what can we do to keep dangerous weapons out of the hands of mentally unstable people. The two things are not incompatible,” he added.

Carson noted, however, that a “state-of-the-art” weapon when the Second Amendment was put in place was a musket.

“The principle was that the citizenry should have, you know, access to whatever they needed in order to protect themselves from a overly aggressive government,” he said.

“I don’t think you can get a surface-to-air missile legally in this country,” he added.

“And we have laws that, you know, take care of that.”