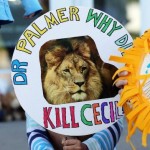 Walter Palmer, the 55-year-old man who sparked international fervor for killing one of the most famous lions in Zimbabwe opened up in an interview with the Minneapolis Star Tribune on Sunday.

The dentist said he would return to his Minnesota practice on Tuesday, six weeks after it was discovered he was the hunter who paid $50,000 to kill Cecil the lion near Zimbabwe’s Hwange National Park.

Palmer was forced to close his office, River Bluff Dental, after drawing widespread criticism for hunting the famous lion.

“This has been especially hard on my wife and my daughter,” he said “They’ve been threatened in the social media, and again…I don’t understand that level of humanity to come after people not involved at all.”

Palmer denied he had been in hiding, adding that he was out of the public eye to “see family and friends.” Read more at the Minnesota Star-Tribune.