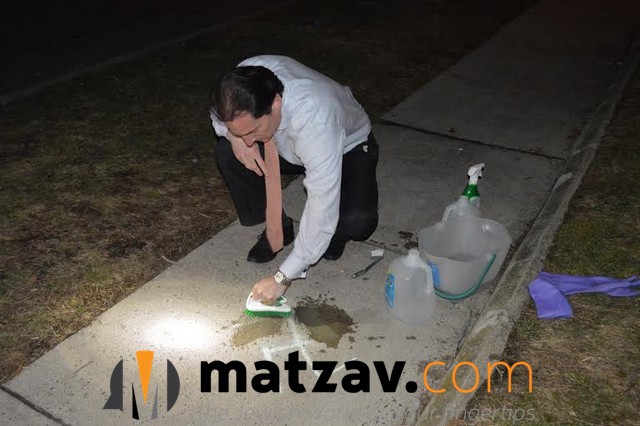 Assemblyman Todd Kaminsky continued his ongoing fight against hateful, anti-Semitic graffiti this week, and sent a strong message that bigotry will not be tolerated in our communities. The Assemblyman was notified by the Rockaway Nassau Safety Patrol (“RNSP”), a local community patrol organization, that a swastika was drawn on a sidewalk on a residential street in Cedarhurst. RNSP worked with officers from the Nassau County’s Fourth Precinct to investigate the matter. Kaminsky responded to the incident immediately thereafter and came to the scene on Monday night, where he personally removed the swastika. Today, an additional swastika was found on the same street.

“Swastikas and other symbols of hate have no place in our community — and those who commit such acts must be brought to justice immediately,” said Assemblyman Kaminsky, a former prosecutor. “I did what any member of the community would do, walking passed a swastika – I got on the ground and removed it. The fact that another swastika was discovered subsequently means that there is a systematic attempt to intimidate this community. We must show that our love for community is stronger than their attempts to install fear in us. We must stand together as a community and say that we will not tolerate anyone’s attempts to spread hatred.”

“Last night, with the assistance of Assemblyman Todd Kaminsky, the Rockaway Nassau Safety Patrol removed a swastika from a sidewalk in Cedarhurst and today another one was found,” said Sholem Klein of the Rockaway Nassau Safety Patrol. “While the police continue to investigate these matters, RNSP will beef up patrols in and around the area. We urge neighbors to review any surveillance footage that they may have and notify us or local law enforcement so that those responsible for this disgusting crime can be held accountable.”

Last year, Assemblyman Kaminsky wrote to Long Island Rail Road (“LIRR”) officials to demand that cameras be placed in local train stations after hateful swastikas were scrawled at the Cedarhurst and Lawrence stations. The LIRR heeded Kaminsky’s call and immediately installed surveillance equipment to deter vandals and catch spineless bigots. In addition, the Assemblyman introduced legislation (A.8374) to make the public display of a swastika a felony offense. “Signs of intolerance and hatred — such as the one perpetrated in our own backyard today — will not be tolerated by me and our community,” Assemblyman Kaminsky concluded. “We must do everything that we can to stamp out intolerance, and I will continue to lead the fight to end this spate of hateful bigotry.”