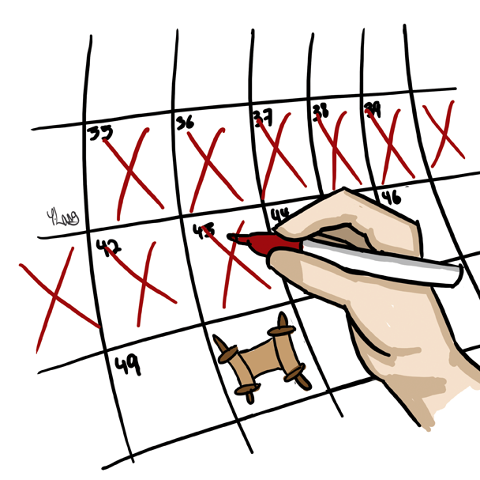 The Gemara in Meseches Taanis, daf lamed, amud bais brings down two Yomim Tovim that are unique. These are the 15th of Av and Yom Kippur. Rabba and Rav Yosef explain that the 15th of Av was special due to the fact that on that day they finished cutting the firewood to be used on the Mizbeach. Rabbi Eliezer Hagadol explains that after the15th of Av the sun’s rays are not as strong as before that date and would affect the dryness of the wood. If the wood would not be properly dried it would not be eligible to be cut for the Mizbeach. We learn the concept of celebrating when we complete a mitzvah from this Gemara. The following question therefore arises; why is there no Yom Tov for the finishing of the counting of the Omer?

Similarly, in Meseches Shabbos, daf kuf yud ches, amud bais, the gemara discusses that Abaye would say that when any young Rabbi would finish a Mesechte, he’d celebrate by making a party for him. This strengthens our question; why not make a Yom Tov for the siyum of Sefiras HaOmer?

There is a different explanation that can be given as well. The whole inyan of counting sefirah is to get to the goal of receiving the Torah. One is unable to celebrate the siyum of counting without having received what one has counted for. The Shibulei Haleket in siman resh lamed vov brings the Midrash that says that as the Jews left Mitzrayim they were given the exciting news that they would be receiving the Torah at the end of forty nine days, on the fiftieth day. In anticipation, the Jews starting counting day by day, eagerly awaiting this momentous occasion. That is why the Torah was koveah the mitzvah of sefirah for all future generations.

Now that we established that the counting was to receive the Torah, it makes sense that the Yom Tov of Shavuos is the siyum and culmination of the counting and receiving of the Torah. This would explain the Orchos Chaim at the end of Hilchos Brachos which says that the Shehecheyanu we say on Shavuos is also on the mitzvah of Sefiras HaOmer because the whole counting is in anticipation of receiving the Torah, and one may not say Shehecheyanu until he gets what he counted for.