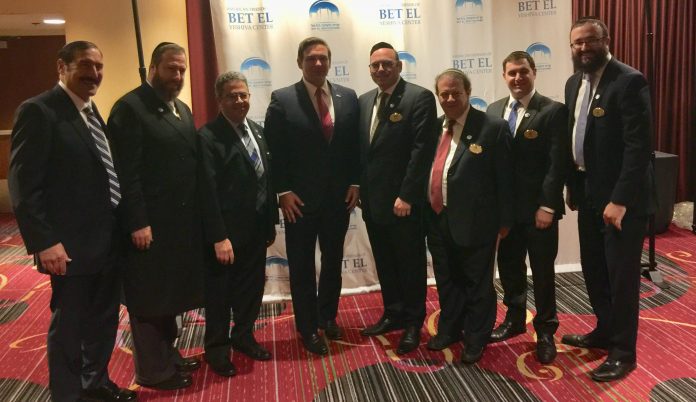 On Sunday evening, Congressman Ron DeSantis of Florida, Chairman of the Subcommittee on National Security, and likely candidate for Florida governor in 2018, shared his passion about declaring Jerusalem as Israel’s capital in a special interview with Duvi Honig, Founder and CEO of the Orthodox Jewish Chamber of Commerce.

Mr. Honig noted the Congressman’s unique understanding that the recognition of Jerusalem is not merely in the interest of Israel, but also of the United States. Congressman DeSantis noted how it compromises the security and effectiveness of US diplomats that they must reside and work in the Tel Aviv area, whereas the Israeli Knesset and other major government offices are in Jerusalem.

Any day now, the Trump Administration is expected to announce a historic change in US policy, likely the official recognition of Jerusalem as Israel’s capital, and possibly even moving the U.S. Embassy from Tel Aviv to Jerusalem. The expected move is in large part the result of Congressman DeSantis’s advocacy on this issue and the high profile Congressional hearing that he held on November 8th. Mr. Honig attended the hearing, as well as a special VIP luncheon with Congressman DeSantis that followed.

“Congressman DeSantis brings a refreshing perspective to the table that changes minds and US policy,” says Mr. Honig.“Israel and Jewish People are blessed to have such a dear friend in Washington.”

The interview took place in the Marriott Marquis Hotel in Manhattan, where American Friends of Bet El Yeshiva Center held its 35th Annual Dinner. Mr. Honig served as the co-chair of the dinner, which attracted over 1,000 supporters. Congressman DeSantis was a guest speaker, and held a special pre-dinner meeting with Mr. Honig, Dr. Joseph Frager, and other Orthodox Jewish Chamber of Commerce dignitaries to discuss various issues related to both economic development and foreign policy.

Congressman DeSantis thanked the community activists for their relationship and support, and vowed to continue working on the pertinent issues they discussed. “We want to make sure that [Jerusalem] remains one of the great cities in the world – and it was not prior to Israel’s sovereignty,” he explained.