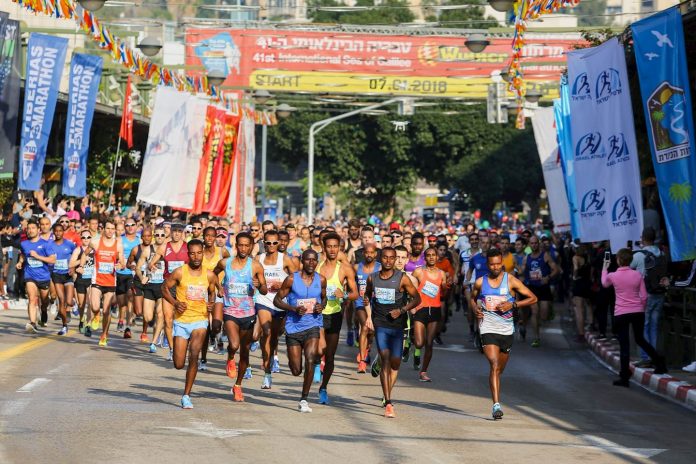 A charedi mother of five from Yerushalayim won the Tiverya Marathon on Friday, the first ultra-Orthodox woman to take first prize in the event.

Bracha Deutsch, known by her friends as “Speedy Beatie,” finished the race in 2 hours, 42 minutes and 18 seconds—the fifth fastest time for a female Israeli marathon runner—and was cheered across the finish line by her husband, a yeshivah teacher, and her children.

Deutsch, a 29-year-old who made aliyah from New Jersey eight years ago, told Ynet that she did not anticipate winning the race. “Elena Dolinin, Israel’s former record-holder, was considered a safe bet. When I passed her during the race, she wished me luck and congratulated me,” said Deutsch.

”Throughout the race, I had great confidence in my abilities since Hashem guided me every step of the way,” she said.

The victory marks Deutsch’s fourth marathon. She competed in the Tel Aviv Marathon while seven months pregnant and began training for the trials just three years ago.

Though Deutsch’s time would have qualified her to enter the 2016 Olympic games, the 2020 Olympics in Tokyo entry requirements demand a completion time of 2 hours and 36 minutes.

“From now on, I could certainly devote more time to training in order to improve my score, Deutsch told Ynet. “I think my dream of becoming the first female ultra-Orthodox Olympic champion might be possible.”

At the medal ceremony, Deutsch held one of her young children and smiled, wearing her running attire of a skirt, long-sleeved shirt and head scarf. Being that the event was on Friday, she promptly left to prepare for Shabbos.