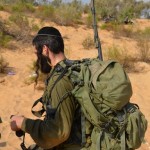 Since the outset of the current wave of unrest and terror attacks in Israel, soldiers of the Netzach Yehudah battalion of the Charedi Nachal unit, have seized 35 prominent protesters who were posing an immediate threat to the security of the soldiers.

Furthermore, during the last few days, the soldiers have seized 13 wanted persons in the cities of Jenin and Tulkarem.

Personnel and leaders of two terror groups, preparing to execute an immediate attack against IDF forces in the area, were among the detainees. Two of them were detained early Thursday morning during an operational activity executed by the battalion in the area of Tulkarem.

Alongside to the battalion’s activity and parallel to the opening of the Knesset’s winter seat, the Charedi soldiers began a special daily seder in Rambam. The soldiers have accepted upon themselves to learn a perek from the Rambam‘s Mishnah Torah on a daily basis in order to complete Mishnah Torah within three years, once they are released from the army.