Yaakov Klein, 22, lies unconscious in intensive care at Yerushalayim’s Shaarei Tzedek Medical Center with a punctured liver after he was run over by two police trucks during what is being called the most violent street clash in Yerushalayim’s history. Yaakov on Sunday night tried to prevent police from removing the body of a 50-year-old homicide victim to take it for an autopsy. Without thinking of the potential risk, Yaakov positioned his slim frame in front of a reinforced police vehicle weighing several tons.

His goal was to block the vehicle’s exit from the scene of the stabbing murder on Rechov Tzefaniah to the L. Greenberg Institute of Forensic Medicine at Abu Kabir.

“We believe that the unnecessary desecration of the dead causes irreparable damage to the soul,” said Yoel Barminka, the shamash of the Ohel Rachel Shul, which was transformed into a kind of field hospital for wounded charedim after Sunday night’s clash between charedim and police. 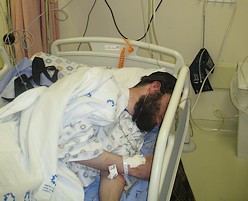 Yaakov Klein is the latest and the most serious casualty of an ongoing altercations between the Eda Hachareidis and the police.

What began two months ago with the opening of the Karta parking lot on Shabbos was further complicated by the arrest of a charedi mother from Toldos Aharon accused of purposely starving her three-year-old son.

This past Shabbos, violence escalated to new levels.

Claims of purposeful police violence against the Shabbos demonstrators combined with the reports Sunday night that a Jew stabbed by a Palestinian was going to be autopsied sparked a spontaneous thronging of several hundred at the scene of the stabbing.

Police, resolved to remove the body, used tear gas, stun grenades and shot live ammunition in the air in an attempt to disperse the crowds.

Deputy Education Minister Meir Porush has refrained from blaming the Eida for the violence and instead has placed the blame on Yerushalayim Mayor Nir Barkat.

During in interview yesterday on the Yerushalayim radio station Kol B’Ramah, Porush said, “Today the charedi public understands the difference between a charedi mayor and a secular one. This whole situation was created as a result of the stupid decision to open the Karta parking lot.”