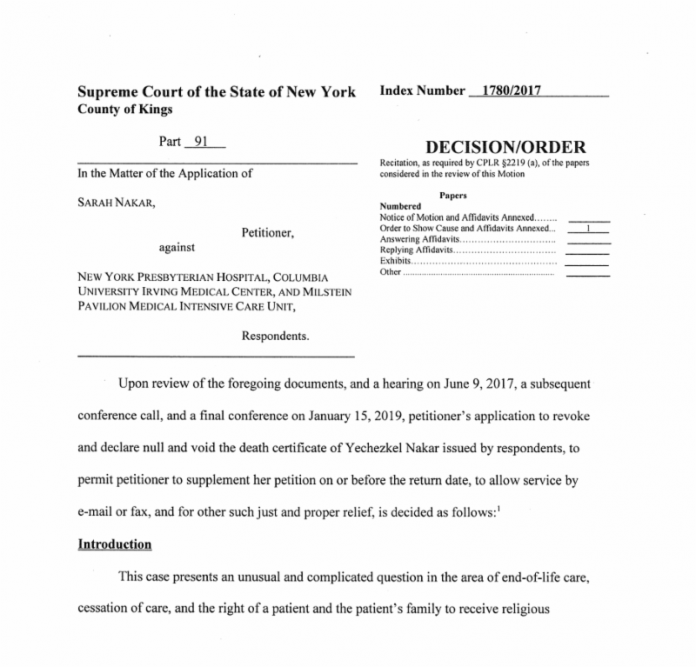 On Tuesday, January 15th, Justice of Supreme Court, Hon. Devin P. Cohen ruled that the declaration of death and the death certificate issued for Yechezkal Nakar on May 31, 2017 must be rescinded and replaced by one with the date of his actual death recorded as June 22, 2017. In this landmark decision, Justice Cohen expressed that Mr Nakar’s religious rights had been violated when the hospital performed brain death testing against the family’s religious objection. The judgement further states that “a reasonable accommodation can only occur by working with the patient (or proxy holder).”

Chayim Aruchim, The Center for Culturally Sensitive Health Advocacy and Counseling, a project of Agudath Israel of America, is often called upon to facilitate such communication and navigate such situations, and applauds Judge Cohen’s decision and the clarity it brings to patient’s autonomy. Rabbi Shmuel Lefkowitz, President of Chayim Aruchim, said, “The mission of Chayim Aruchim is to help patients and their families make health care decisions according to their values. Chayim Aruchim has found that many medical professionals believe that they know what is best for their patient, and try to convince families to act in accordance with the values of the medical professional. The decision by Justice Devin Cohen clearly states that it is the patient and/or his or her family’s values that should direct medical decisions. Medical professionals need to be more culturally sensitive to religious values and patient autonomy.”

In accordance with its mission, Chayim Aruchim has been educating hospital administrative staff on the cultural needs of the Orthodox Jewish Population. On December 19, 2018, Chayim Aruchim hosted a symposium for medical and legal healthcare executives at the Boro Park Center. The key presenter was Roger Severino, Director of Office for Civil Rights (OCR), US Dept of Health and Human Services. Mr. Severino said,“Some of the best kept secrets are that Congress has time and time again, over the last forty to forty-five years, passed laws in health care protecting conscience and moral conviction through bipartisan majorities, signed by presidents of both parties, year after year, decade after decade.” Rivie Schwebel, Vice Chairman of the Board of Chayim Aruchim said, “It is very comforting to know that OCR is there to help us.”

Rabbi Gedaliah Weinberger, Chairman of the Board of Chayim Aruchim said, “NY Presbyterian is a state of the art hospital, where many of our community’s patients are treated.” “NY Presbyterian Hospital made a mistake with Mr. Nakar, and they are determined that this not reoccur,” says Leah Horowitz, Care Navigator for Chayim Aruchim. “We have met with their administration and legal departments and they have committed to promoting cultural sensitivity and ensuring that patients are given the opportunity to evaluate their options. We have an open line of communication with the NY Presbyterian network, as well as with other NYC hospitals, and have successfully been involved in transferring patients to facilities to the satisfaction of both the hospital and the patients’ families.”

Justice Cohen’s verdict has enforced a New Yorker’s constitutional right to decide how and when they wish to be treated by medical professionals. Family members need to know they can utilize that right and advocate on behalf of their loved one. Chayim Aruchim is available to families during this most difficult time.