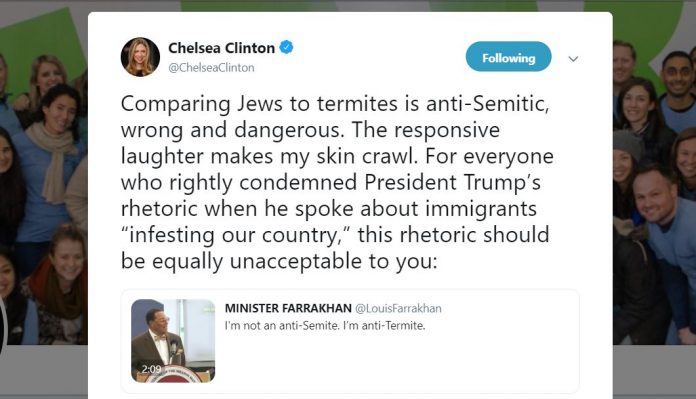 Chelsea Clinton is urging her fellow Democrats to condemn Nation of Islam leader Louis Farrakhan after he delivered yet another controversial speech about the Jewish community.

“To members of the Jewish community who don’t like me, thank you very much, for putting my name all over the planet because of your fear of what we represent,” Farrakhan said. “I can go anywhere in the world and they’ve heard of Farrakhan. Thank you very much.”

He continued: “They call me an anti-Semite. Stop it. I’m anti-Termite. I don’t know about hating somebody because of their religious preference.”

Clinton responded on Twitter by calling on people to condemn Farrakhan and his inflammatory words.

“Comparing Jews to termites is anti-Semitic, wrong and dangerous. The responsive laughter makes my skin crawl. For everyone who rightly condemned President Trump’s rhetoric when he spoke about immigrants “infesting our country,” this rhetoric should be equally unacceptable to you.”