A chossid of the Chernobler Rebbe complained to his manhig about the difficulties he’s experiencing in making living.

The Rebbe asked the chossid what his profession is. The chossid said that he is a professional photographer, but that there is little demand for this type of work in the chareidi community.

The Rebbe’s response demonstrates the righteousness of the leader who changed his habit to help the livelihood of his chossid.

The Rebbe, who is known, like other admorim including the Vizhnitzer Rebbe of Monsey, to shun having his picture taken, told the chossid, “Take my picture. Maybe it can help you make a living.” 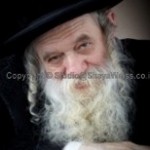 The chossid explained to the Rebbe that a proper picture is taken in a studio with the appropriate lighting and background.

The Rebbe, whose every minute is so precious, joined his chossid at a studio for an hour, allowing his follower to take his picture so he can sell it and make some money.