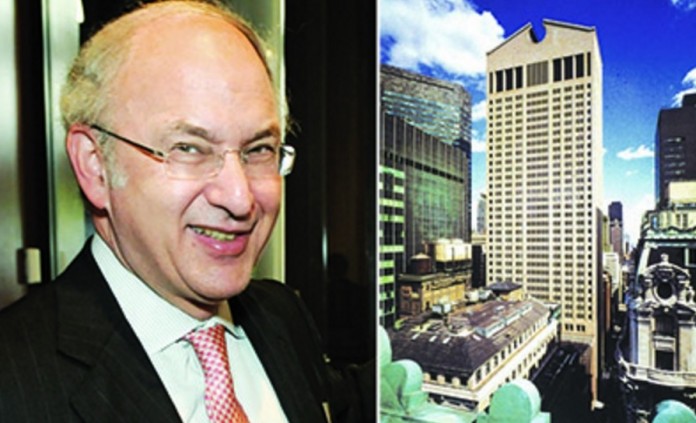 Developers who planned to convert Manhattan’s Sony Building into ultra-luxury condominiums, including a $150 million listing, agreed to sell the tower for more than $1.4 billion, according to a person with knowledge of the deal.

Investors Joseph Chetrit and David Bistricer, have abandoned the condo proposal and are under contract to sell the building, at 550 Madison Ave., to a partnership led by Olayan Group, a Saudi Arabian investment firm, said the person, who asked not to be identified because the transaction is private. Chetrit and Bistricer acquired the Midtown property, formerly Sony Corp.’s U.S. headquarters, for $1.1 billion in 2013.

The buyers intend to keep the building as office space, according to a statement by Chelsfield Group Ltd., Olayan’s London-based partner on the deal, that didn’t disclose the price.

Plans to convert the 37-story Sony office tower into condos got under way just as a boom in construction of high-end Manhattan homes was showing signs of an oversupply. The developers of the project — where an eight-bedroom apartment for $150 million would have been New York City’s most expensive listing ever — faced competition from at least six other ultra-luxury towers that are under construction in Midtown, all aimed the world’s wealthiest investors.

The Sony condo plan “felt like it missed the window,” said Jonathan Miller, president of New York appraisal firm Miller Samuel Inc., which wasn’t connected with the sale or the conversion proposal. “This project came online at the tail end of the acquisition euphoria and it seems prudent to move on.”

The building is nestled within other Midtown towers of a similar height. That would have made it a challenge for the developers to get prices comparable to other projects in the area, such as Vornado’s 220 Central Park South and Zeckendorf Development LLC’s 520 Park Ave., which charge a premium for their unobstructed views of Central Park, Miller said.

Kathleen Cudahy, a spokeswoman for Chetrit, said the developer wasn’t immediately available to comment. A representative for Olayan, Richard Hobson, declined to comment beyond Chelsfield’s statement. The transaction was first reported earlier Monday by the Real Deal.

Sony, which had vacated the 850,000-square-foot (79,000-square-meter) building on Madison Avenue between 55th and 56th streets, paid rent to the Chetrit partnership until just last week, according to the person with knowledge of the sale.

The new owners will be taking possession of a mostly empty building just as Midtown is expected to have a jump in large office vacancies. By 2017, about 21 million square feet of Midtown’s Class A space, or about 14 percent of the market, will probably be available, as tenants no longer faithful to Manhattan’s priciest office district fan out across the city, according to an analysis by brokerage Savills Studley Inc.