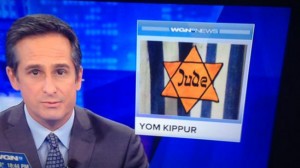 Someone somewhere is klopping an Al Chet of some sort on this boo-boo.

A Chicago television news station made a poor choice to accompany a segment on Yom Kippur with a yellow “Jude” Magen David that Jews were legally required to wear in Europe during the Holocaust.

Not the greatest of choices, to say the least.

The gaffe by WGN-Channel 9 was first flagged by a Chicago editor, who posted a screenshot of the WGN news broadcast online.

The station responded to apologize for the art choice about 30 minutes later, and said in a tweet the image was “inadvertently” used.

Over substitute news anchor Tom Negovan’s shoulder appeared the image of the yellow star. The 28-second story Negovan read made no reference to the graphic on screen and included no other illustration.

In a statement posted online, the station said the picture came from its image bank, and they “failed to recognize that the image was an offensive Nazi symbol.”

“We are extremely embarrassed and we deeply apologize to our viewers and to the Jewish community for this mistake,” the WGN statement said. “Ignorance is not an excuse.”

The station was also taking apologies to its viewers out of the public sphere, with “J. Lyons, News Dir.” directing individual users to direct message WGN’s account.

European Jews were legally required to wear the yellow badge on their clothing beginning after Kristallnacht in November, 1938, but the anti-Semitic practice of forcing Jewish citizens to don an identifying badge dates back to the 13th century.

Jennifer Lyons, news director of WGN, said she saw what she described as the “horrible error” while watching the newscast at home Tuesday night and called the newsroom immediately. The station apologized on the air minutes later, but by that time it was too late to contain the explosion of outrage on social media.

“Last night we ran a story to recognize Yom Kippur, the Jewish Day of Atonement.  Regrettably, we failed to recognize that the artwork we chose to accompany the story contained an offensive symbol.  This was an unfortunate mistake.  Ignorance is not an excuse.  We are extremely embarrassed and we deeply apologize to our viewers and to the Jewish community for this mistake.

“We are investigating how this situation occurred, reviewing our in-house policies and making changes in order to avoid such mistakes happening in the future.  Thank you for your understanding. We promise to do better.”