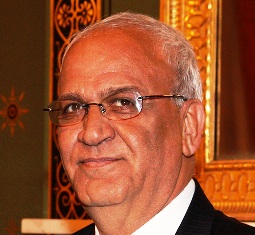 The high-ranking Palestinian Authority official in charge of negotiations with Israel made an analogy between the Jewish state and the bloodthirsty terror group ISIS in an address in Qatar, the Hebrew news site nrg reported on Tuesday, citing Al Jazeera.

Erekat also called for international support in the struggle to end the “Israeli occupation” and asserted that the “two-state solution is the only possible way to put a stop to the suffering of the Palestinian people.”

The Doha Forum, held under the auspices of Emir Sheikh Tamim bin Hamad Al-Thani, kicked off this weekend. UN Secretary-General Ban Ki-moon was in attendance, along with many world leaders.

In his opening remarks to the gathering, Qatari Foreign Minister Mohammed bin Abdulrahman bin Jassim Al-Thani  stressed the need to support the human rights of the people of the Middle East, and said that reducing violence in the region is directly linked to ending the Israeli occupation of all Palestinian territory, including Jerusalem.