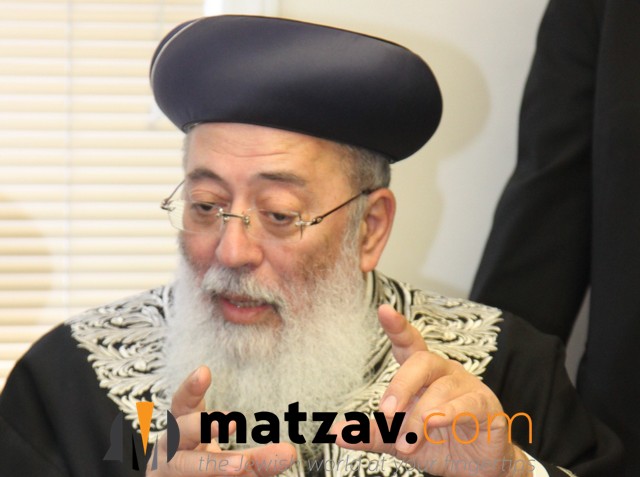 Spain’s EFE news agency announced that Chief Rabbi Shlomo Amar was offered Spanish nationality along with 220 others. 4,300 Jews have applied for Spanish nationality since last year, when Spain legislated that descendants of Jews exiled from Spain are eligible for citizenship. Portugal passed a similar law in 2013.

Yechezkel Shabu, Rav Amar’s press advisor, said, “We received no notification of this. Furthermore, we did not even submit a request for citizenship. The rov was not born in Morocco and is an Israeli citizen since he came to Eretz Yisroel.”

“I first heard of this yesterday,” he said. “I contacted the Jewish assistant of the [Spanish] Justice Minister, and after they looked into it there I was told that on Friday, the Spanish government held a meeting about authorizing 220 citizenship requests submitted in the wake of the law authorized last year regarding the Spanish exiles. During the discussion, the government decided to confer Rishon Letzion and Chief Rabbi of Yerushalayim Rav Shlomo Amar with a Spanish passport and honorary citizenship as a mark of appreciation for his work on behalf of… many Jews who went to Venezuela and wanted to return to Spain.”

He was referring to three years ago, when Rav Amar met with the former and present kings of Spain and Spanish officials to persuade them to make legislation to help the Venezuelan Jews.