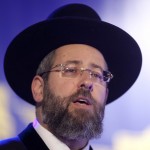 Some 24 months after being elected as Ashkenazi Chief Rabbi of Israel, Rav Dovid Lau has moved with his family from Modi’in to Har Nof, Yerushalayim.

Rav Lau is now a neighbor of Rav Moshe Sternbuch, Raavad of Yerushalayim.

Rabbi Lau was a longtime rov and resident of Modi’in, almost since the city was first established, until he was elected to the position of chief rabbi.

The office of the Chief Rabbi confirmed the move to Yerushalayim and added that Rav Lau will continue to deliver shiurim in Modi’in.