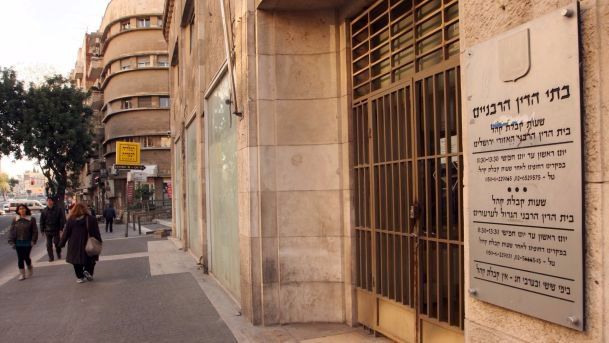 The Israel based Center for Women’s Justice (CWJ) reports that the Rabbinate’s Beis Din Hagodol in Yerushalayim overturned the ruling of a Yerushalayim regional beis din which had disqualified the conversion of a woman who converted 30 years ago. The new psak enabled her daughter, Sarit Azoulay, to be registered for marriage with a Jew.

CWJ recalled that Sarit’s mother converted to Judaism 30 years ago under the auspices of Chief Rabbi Goren. Two years ago, when Sarit went to register for a marriage license, the registrar referred her to a beis din to “clarify her Jewishness” in accordance with new Rabbinate regulations. As part of the inquiry, the beis din summoned Sarit’s mother and asked her questions about her lifestyle.

Two weeks before the planned wedding, Sarit was notified that that she could not marry because her mother’s conversion was cancelled. At the last minute, Sarit approached Rabbi David Stav of the Tzohar Rabbinical Organization and he officiated at the wedding.

A year ago, the Center for Women’s Justice (CWJ) appealed the decision not to recognize Sarit as Jewish. At a hearing held a year later before a beis din headed by Chief Rabbi Rav Dovid Lau, the beis din accepted the appeal and declared Sarit Jewish.

“We are angry because although the individual case of Sarit has been resolved, the rabbinic court has not discontinued its policy of interrogating converts about the most intimate and private details of their lives,” CWJ complained. “The rabbinic court noted during the hearing that it will continue to summon converts for ‘clarification of their Jewishness,’ and they wondered why Sarit’s husband, whose mother is also a convert, was not summoned to undergo a similar procedure.”

Dr. Susan Weiss, director of Center for Women’s Justice, summed up: “The most important bottom line is that Sarit can finally smile, but other converts cannot sleep at night. The religious establishment is looking for them and could deny their Jewishness at any moment.”

In reality, the people who should be blamed are those who created the problem in the first place by bringing non-Jews to Israel and providing them with spurious conversions.

Several years ago, Haaretz reports, the Chief Rabbinate revoked thousands of conversions performed by special geirus courts, but withdrew the ruling when it seemed that the High Court would get involved in the issue.